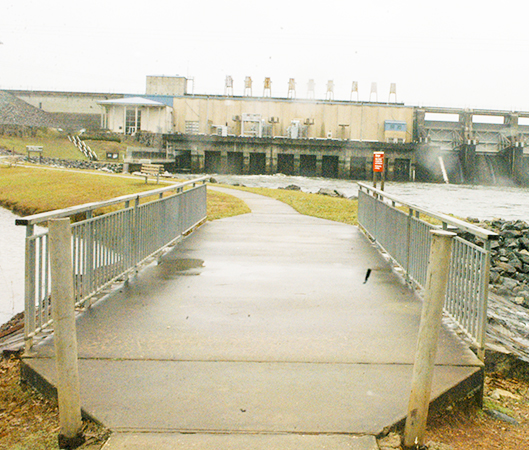 WEST POINT — One hundred years ago this month, in December 1919, downtown West Point experienced what would be the worst flooding of the 20th century.

On Dec. 10 of that year, the flood waters crested at almost 11 feet above flood stage.

Water would be in some low-lying areas for more than a week, and it would take many weeks to get back to normal.

The severe flooding was the result of three straight days of heavy rains in the Chattahoochee River basin north of town.

For many years, flooding was a frequent misery for West Point and the surrounding area.

Another bad flood in February 1961 would be the final straw. The following year, a federal flood control act appropriated money to build a dam on the river north of town.

It would cost more than $100 million but would provide for flood control, a source of hydropower and public recreation. Prior to West Point Dam going into operation in 1975, West Point had experienced an average of one flood a year every year since 1900, a flood being defined as having water in the street on West 3rd Avenue in front of the present location of CenterState Bank.

Since 1975, there’s been one flood in West Point, that one taking place in May 2003 following an extraordinary rain event upstream. Some places in the basin area got between 12 to 16 inches of rain in one night. With West Point Lake being at its summer pool level of 635 feet above mean sea level at the time, there was no way to prevent flooding in downtown West Point.

Between the late fall and winter months, the level of West Point Lake drops between 625 to 630 feet. This is the normal rainy period when the lower lake level allows for storage capacity in the event of heavy rain. What happened Sunday is an example of this.  The U.S. Geological Survey (USGS) weather station upriver from West Point at Whitesburg, Georgia recorded more than three inches of rain in a 24-hour period. In the old days that could have been bad news for West Point with the river spilling out of its banks and covering such low-lying places as the old River Bowl. A couple of more days of heavy rain upriver would have meant a much worse flood.

Three inches of rain in one day can dramatically increase the amount of water in the river. Water is measured in terms of cubic feet per second. The rate recorded at Whitesburg roughly tripled between Saturday and Sunday. According to Ben Williams, park ranger with the West Point Project Management Office, there’s a rule of thumb between rain upstream and what’s coming down the river – for every inch of rain there’s one foot more coming downstream.

With three inches, there’s three more feet of water coming downstream. Between Saturday and Monday morning, the lake level went up by more than a foot, from 628 to over 629.

The dam can hold water up to around 640 feet. What this all means is that when West Point Lake is at its winter pool level of between 625 and 630 feet, the area could get three inches of rain a day for several days in a row and there would be no danger of flooding.