Year in Review Part 2: Looking back at April through June in The Greater Valley Area 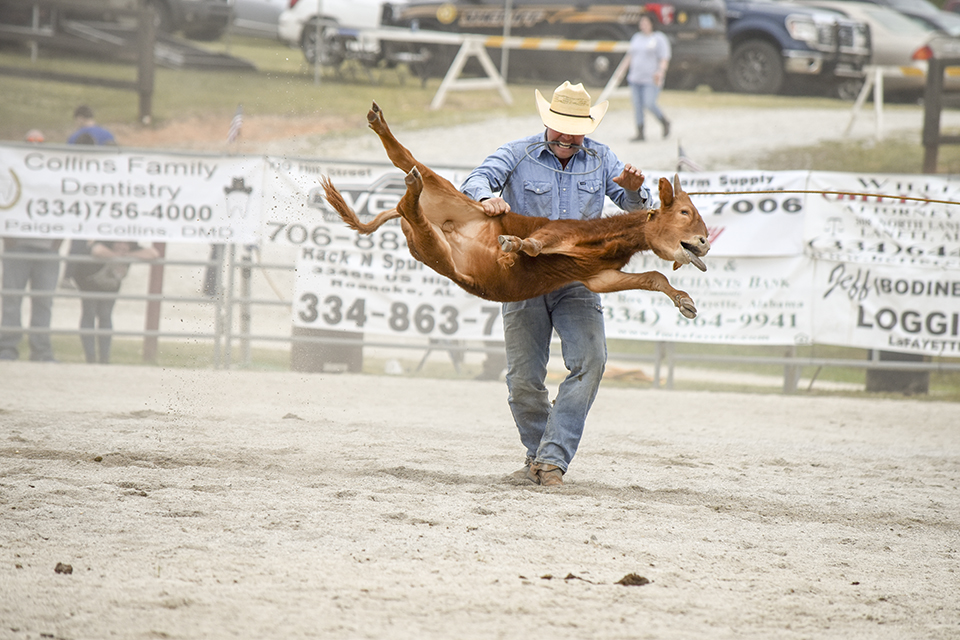 A bullrider filps a calf in the air to tie it up after lassoing a rope around it neck Thursday afternoon at the Chambers County Agricultural Arena in LaFayette for the Special Needs Rodeo. The calf was quickly untied and unharmed. — Dustin Duncan

EDITORS NOTE: This is the second of a four-part series looking back at the year 2019 in Chambers and Troup Counties.

The Chambers County Sheriff’s Office launched a smartphone application designed to share more information to residents quickly. The phone app allows quick alerts on news releases, current inmate information and allows residents to submit a tip to the sheriff’s office. The app is available for iPhone and Android users. 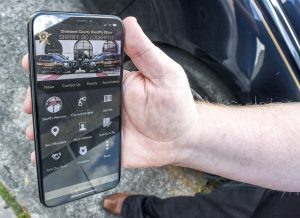 The Chambers County Sheriff’s Office has hosted a special needs rodeo for children from Chambers, Lee, Randolph, Tallapoosa and Russell Counties a day before the Sheriff’s Rodeo for the past nine years. This past year, there were hundreds of smiling faces and expressions of joy at the Chambers County Agricultural Arena for the event. 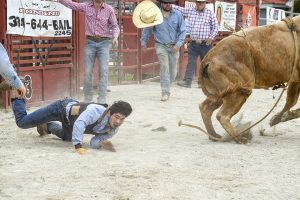 Mateo Valdez hits the ground after flying off of a bull at the Chambers County Agricultural Arena in LaFayette for the Special Needs Rodeo. — Dustin Duncan

The body of Derek Grant Southern Jr, 26, of Marietta, Georgia was found in the 4100 block of 35th Street SW in Lanett. Police said there weren’t any signs of foul play and the incident was treated as a death investigation. As of Dec. 26, there hasn’t been any additional information released.

The Essie J. Handy Cemetery in LaFayette was memorialized with a marker from the Alabama Historical Society. Family members of Essie Handy were on hand to tell the stories of how their mother raised money to create the cemetery by walking around town and asking for change. At the time, there was only one other cemetery where African-Americans could be buried. 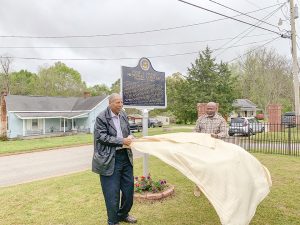 The West Point City Council appointed Deedee Williams to its vacant seat left open by Benjamin Wilcox, who stepped down in January to accept the position of West Point municipal court judge pro-tem. The council voted 4-1 in favor of Williams. Amanda James and Tracy Bandy were the other candidates for the seat. 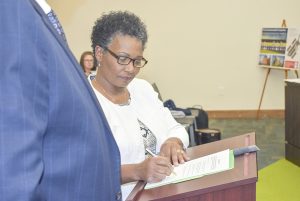 Deedee Williams was sworn into the West Point City Council.

Fred’s goes out of business in Lanett

The Associated Press reported that Fred’s in Lanett was one of the 159 underperforming and unprofitable stores that the discount chain closed in May. The company closed stores in 13 states. The building still remains empty. 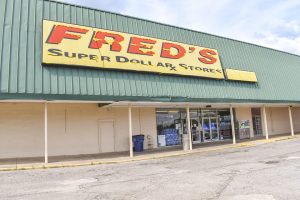 The Fred’s location in Lanett at 622 Cherry Dr. is one of 159 stores that closed nationwide.

Shelbie Hunt won a six-figure settlement after learning a family mishandled funds set aside for her future when her father died in 2000. She hired Barbi Agricola, owner of Agricola Law in Opelika to take her case. 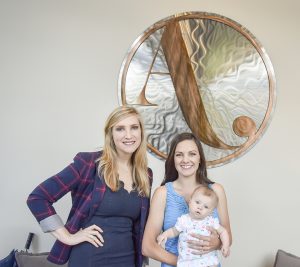 Pictured is Barbi Agricola, owner of Agricola Law in Opelika, left, and Shelbie Hunt, who recently was awarded funds from an insurance agency due to the mishandling of a conservatorship in Chambers County. Hunt is holding her 4-month-old daughter Amelia.

The Chambers County School District hosted two forums on a potential consolidation between LaFayette and Valley High Schools. One of the forums was in Valley and the other in LaFayette. There has not been a decision about consolidation. The board of education would have to approve a recommendation from the superintendent. 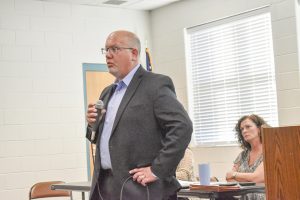 Lanett Mayor Kyle McCoy announced during a news conference that the city of Lanett and the Chambers County Development Authority had come to terms with the owner of the mill site on a purchase agreement. Since the ownership changed hands, the site has undergone a massive cleanup effort, adding a Tractor Supply store and several solar panels. 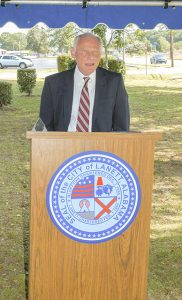 The Lanett City Council voted to increase the pay of elected officials, after August 2020. The person elected mayor will make $1,500 a month and the city council members will make $700. Currently, the mayor makes $350 and the council $200. It was the first salary increase for the mayor or council since 1988.

The Newman Police Department reported that a man they believed to have robbed banks in West Point and LaGrange committed suicide after allegedly robbing another Alabama bank.  Mark Garniss, 54, was found dead in his apartment after police surrounded it in May after the alleged bank robbery. It is believed he robbed the Capital City bank in West Point on Dec. 21, 2018.

Gov. Kay Ivey signed the most stringent abortion legislation in the nation, making performing an abortion a felony in nearly all cases. The legislation Alabama senators passed would make performing an abortion at any stage of pregnancy a felony punishable by 10 to 99 years or life in prison for the provider. The only exception would be when the mother’s health is at serious risk.

The groundbreaking of the 25,000-square-foot building happened in May and is still under construction. The announcement piggybacked off WestRock opening a 375,000-square-foot distribution center in Valley Industrial Park and John Soules Foods announcing plans to locate a production facility in Valley. 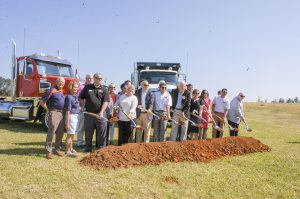 Valley city officials and representatives of Four Star Freightliner enjoyed tossing some dirt with shovels. Taking place in plain view of heavily-traveled I-85, the groundbreaking marks the start of site preparation on an 11-acre site owned by the company not far from the Lanier-Carter buildings. A 25,000-square-foot building will be going up and could be open before the end of the current calendar year. 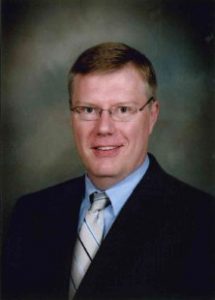 The sandwich shop in downtown West Point closed in June. The business opened in June 2018. There wasn’t much of a reason for the closure other than a sign on the restaurant’s door. “To all of our wonderful customers, we regret to inform you that we will no longer continue serving you at this location,” the sign read. “We thank you for all of your business and support. Be sure to visit another one of our many locations!” 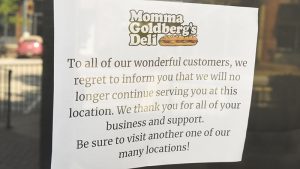 A sign at Momma Goldberg’s in West Point informs customers on the restaurant’s closure. –Daniel Evans 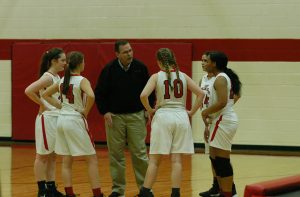 The fast-food chain Jack’s opens its second restaurant in Chambers County. The business had a grand opening with a week full of specials including free food giveaways. 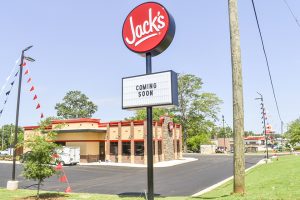 Jack’s in Valley opened its doors to the public at 5 a.m. on Monday, June 17.

The West Point City Council denied a request from the West Point Development Authority for $80,000 from the city’s Forward Fund in a special called meeting. The funds were to purchase part of property on 10th Street in West Point, tear down properties and redevelop the land to sell. Part of the reason for denying the loan was that the council didn’t want to deplete the fund. The development authority took control of the contract a week later without the help of the city.

The LaFayette Police Department Youth Police Academy graduated 34 students Friday at JP Powell Middle School after a week of attending sessions with the LaFayette Police officers. LaFayette High graduate and Auburn Tiger running back JaTarvious “Boobie” Whitlow made a special appearance to speak to the graduates. 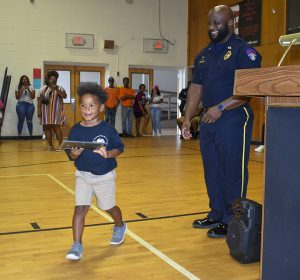 Janmeon McCants smiles as he accepts his certificate for graduating from the LaFayette Youth Police Academy at JP Powell Middle School in LaFayette.