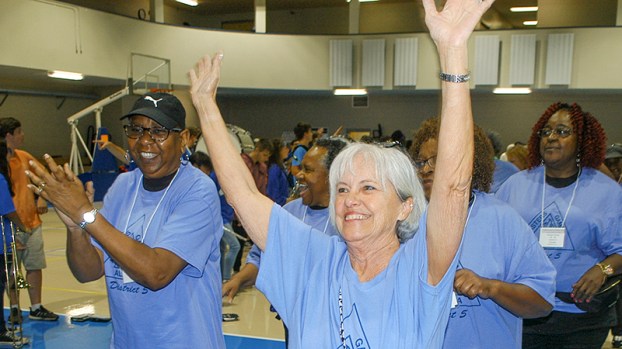 The opening ceremony for the 2019 State Masters Games kicked off in October at the Valley Community Center with competitors coming from all throughout Alabama. --File Photo

EDITORS NOTE: This is the fourth of a four-part series looking back at the year 2019 in Chambers County and Troup County.

Gov. Kay Ivey visited the Bradshaw-Chambers County Library on the last day of September to unveil a plaque for artist Chuck Moore, who created the “Sarge and Scrappy” statues that now stand outside the library.

The City of Lanett turned the water in its new downtown fountain pink in recognition of Breast Cancer Awareness Month. The fountain stayed pink throughout the month to honor the memory of those who have passed away from breast cancer and to serve as an expression of hope for those who have been diagnosed with the disease.

Chambers Academy celebrated 50 years as a school in October with a gathering of alumni. A large gathering was present inside the school gym for fellowship, dinner and the 50-year anniversary program. A slideshow was shown of past and present events at the school.

A rodeo raised thousands of dollars for the First Responders Crisis Fund, a nonprofit that benefits first responders dealing with adversity in their personal lives.

A fire at Valley Walmart in October caused the store to be evacuated. According to Valley police, a man lit a full cart of paper products and cardboard on fire and ignited it and other products. The Valley Walmart was closed for several days as repairs were made. Troy Maloy Brown, 28, confessed to setting the blaze the next day and was charged with second-degree burglary, first-degree arson and first-degree criminal mischief.

The list released by the Alabama State Department of Education listed John P. Powell Middle School and LaFayette High School as “failing schools.” This was John P. Powell’s second consecutive year on the list and LaFayette’s first time since 2017, according to previous records by the state. According to the state, the “failing schools” are in the bottom six percent of public Alabama schools for the 2018-2019 school years based on the state’s standardized assessment in reading, English and math.

A celebration was held at Kia Motors Manufacturing Georgia in November, celebrating the plant’s 10 years in West Point. Local and state officials attended, including Georgia Gov. Brian Kemp. “I’m also glad that there are over 3,000 hard-working Georgians that are employed here now,” Kemp said. “I know that the effect on the community is much, much more than that.”

Every municipality in Chambers County, plus West Point, read proclamations to help raise money for the Myers family. Cheryl and Hermon Myers are the founders of the Christian Service Center, which helps families in need throughout the year and even more throughout the holidays. The family has recently been through tragedy with their oldest son, James Myers, suffering a staph infection. The illness has put him in a wheelchair and he will need back surgery, which will cost thousands of dollars.

The annual Valleywide Christmas parade was held in mid-December and awards were handed out for best floats. Receiving trophies in the school category were Chambers County Career Technical Center was in first place; Fairfax Elementary came in second; and ACTS Academy finished third. Zaxby’s came in first in the business category. Terminix was second and East Alabama Medical Center came in third. In the community entries, winners were the City of Lanett in first, Missiles for Christ second, and the Valley Swim Team third.

Republican candidate Casey Chambley officially withdrew from the superintendent race after learning he would not be able to qualify for the primary election, according to Greg Ward, Republican Party Chairman. Democratic candidate Winford Ashmore also learned he would not qualify for the race on the Democratic side of the ticket. According to the Alabama Secretary of State office, any person attempting to run for superintendent must have a signed certificate from the state superintendent of education, proving they hold a certification of administration and supervision. That certificate had to be turned into the Chambers County Probate Judge’s office by Dec. 12. Chambley said he planned to qualify for the November 2020 general election as an independent.

A 26-year-old woman working as a contract nurse employed by We Care, in the Troup County Sheriff’s Office medical unit was arrested in December for having sexual contact with an inmate, according to the Troup County Sheriff’s Office. Sheriff James Woodruff received information that TCSO nurse Dorathy Pike was having an improper relationship with a trustee working in laundry Monday morning.

Seven-year-old Ethan King of Lanett was king for a day at the Christmas Merry-Go-Round in Valley in December. He was the three millionth person to ride the merry go round since it started in 1956. He received a $100 gift card to Walmart, a bag of candy, a free Merry-Go-Round T-shirt and other prizes.

A man wanted in Chambers County for a 1985 murder was sentenced on federal charges in the U.S. District Court of the District of Puerto Rico. According to court documents, David Anthony Pike, 57, was sentenced to two years in a Florida prison for aggravated identity theft.

A 72-year-old man was found dead in a well in Beulah and a Valley man has been charged with murder,... read more