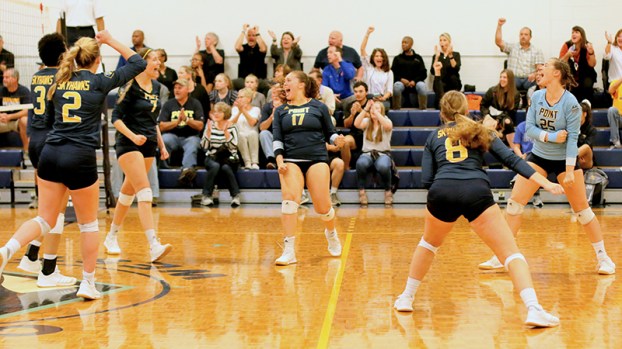 Point University finished with a 19-2 conference record, which was second best in the Appalachian Athletic Conference. Below, Faith Pearson dives to save a point. --Randall Hammer

Year in review: Point thrives in 2019

After losing in the second round of the Appalachian Athletic Conference tournament, Point University’s coach Amanda Jones left to take the head coaching job at the University of West Florida.

This opened the door for Joe Herrera to take over.

After losing their first conference game, the Skyhawks rattled off 12 straight wins, finishing with a program-high 19 conference wins.

“They’ve [the senior class] kind of set that standard, and they helped our team get to a certain point,” Herrera said. “They don’t tolerate anything, but the best that the girls can give our team.

Finishing with an overall record of 24-10, Point made the National Association of Intercollegiate Athletics national tournament for the first time in program history.

Whenever there is a tournament selection, teams usually gather together to watch the scenarios play out. The Skyhawks weren’t able to do so because of class schedules. When the announcement was made, several girls were in class, so Herrera sent a text message to the team group chat giving the official news.

“It was exciting for the team. We knew we had a really good chance of making it, but we our whole motto this whole year was we wanted to continue to go 1-0,” Herrera said. “We did not officially celebrate till we finished our season with our last game.

A big reason the Skyhawks made the tournament was its senior class.

“They’re a very special group of seniors they’ve been together from the beginning, as a freshman. They were there when the program was kind of starting pretty much from nothing,” Herrera said. “They’ve been together with the high with the lows. So they just stuck together, and have led this program to where it is.”

Point had five seniors on its roster. Three of them will forever be in the school record books.

Outside hitter Charlotte Havrisik was the team’s offensive juggernaut. She finished her career with the most kills in a career with 1,089.

“It signifies how much this program has grown because I wouldn’t have been able to do what I did without the help of them [the other girls] and what they do on the court,” Havrisik said. “It’s just a celebration of the team.”

Defensively she finished with 174 total blocks, which is second all-time.

Setter Julia Felix is the best overall player to ever play for the program. The New Orleans native owns several career records including assists (3,494).

She was the best distributor in the program by far. Her 3,494 career assists are 2,705 more than second place. She owns the top four single-season assist records and the top 13 single-game records.

Libero Tessa Burns was one of the players that stepped up defensively throughout her career. She finished with 1,355 career digs and finished third with 78 serving aces.

“When you commit to a college, you can commit all the way for four years,” Herrera. said. “They did that. They stuck it out and said, you know, set the bar high for the rest of us.”

These three seniors also finished with the top three spots in sets played. Felix led with 457, followed by Havrisik (416) and Felix (400).

“The baton is passed from the seniors to the underclassmen to continue that level of play,” Herrera said.

Now Herrera must replace that level of production for next year’s team, but he has a big selling point now that he didn’t necessarily have last year — Point made the NAIA Tournament.

“It’s definitely going to help us with recruiting, knowing that, hey, here’s a team that is not just, you know, surviving but a team that is on the rise,” he said.

The past three years have been tough on the Beulah boys’ basketball team, finishing with a combined 24-34-1 record. However,... read more