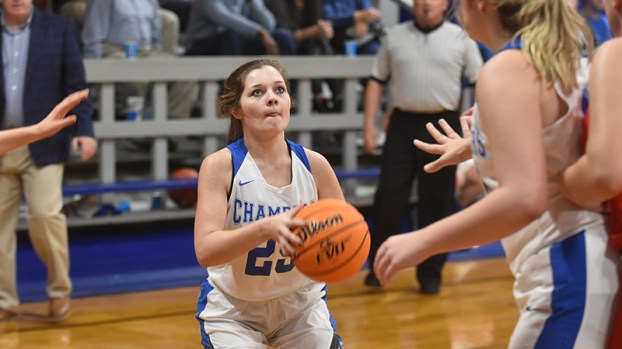 Not many teams experience a week like the Chambers Academy girls basketball team has in store for them, as it plays two of the top 10 teams in AISA.

The first opponent is No. 2 Lee-Scott, followed by No. 6 Springwood.

“It’s gonna be a major challenge for us,” Chambers Academy girls basketball coach Jeff Hines said. “I think our girls will be up for the challenge. Now, what does that mean? We win or lose? I can’t answer that.”

Lee-Scott sits at 14-2 this season. The 14 wins are the most by any AISA girls basketball team ranked in the top-10.

The Warriors are coached by Corey Ivatt, who has been their head coach since the start of the 2014-15 season. In that time, the Warriors have made the state semifinals four times and were the runner-up twice. She coached the AISA East All-Star team after the 2018-19 season.

“Lee Scott’s got a really, really good team and a really good coach,” Hines said. “Ivatt does a great job with them and then they’ll be well prepared. They’ll execute extremely well. So we’ll have our work cut out for us.”

Even though they face a tough week, the Rebels are in a good spot. They are 9-3 this year, with three wins in region play.

Chambers has taken several steps forward this season, most notably in the turnover department. Early in the year, it struggled to not turn the ball over. Per Hines, the Rebels were averaging close to 30 turnovers a game. That number has dropped significantly, as it is closer to 15 a game.

“If we can keep it around that [15 turnovers] and make some shots, we might be right there,”  Hines said. “ Defensively I think we’ll play about as well as we’ve played all season. We’ve hung our hat on defending people and playing for 32 minutes.”

Against East Memorial, it turned the ball over only six times.

The Rebels will be without Bretten Stephens against Lee-Scott and will most likely be out against Springwood on Thursday.

The junior is the team’s starting center. She hurt her ankle in the team’s game against East Memorial on Friday.

Hines doesn’t plan to change up any schemes to deal with the loss.

“It is what it is, and the other seven girls will step up,” Hines said. “We’ll play hard when we hung our hat on playing hard for 32 minutes all year.”

With its blowout win at Loachapoka and a nine-point win at Wadley, the Lanett boys basketball team is poised to... read more