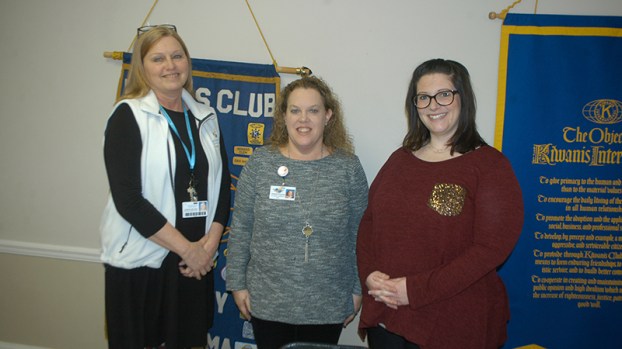 Jenny Goodwin (at center), principal of Bob Harding-Shawmut Elementary School, talked about her school at Wednesday’s noon hour meeting of the Kiwanis Club of Valley.

VALLEY — Starting with the 2017-18 school year, there were some major transformations for Bob Harding-Shawmut and LaFayette Lanier elementary schools. Each school made the change from having been a long-time k-5 school. Bob Harding-Shawmut is now a pre-k through second grade school for both the Shawmut and Langdale communities, and LaFayette Lanier is a grades 3-5 school for the new school district.

The change over has been a very smooth one. Jenny Goodwin, the principal for the Bob Harding-Shawmut school, was the guest speaker for Wednesday’s noon hour meeting of the Kiwanis Club of Valley and talked about the Valley school that’s just for the little folks.

“Our school is fun, exciting and sometimes loud,” she said, attributing that to teachers who are very enthusiastic about what they do, a good group of parents who are involved with their children’s education and kids who love the challenge of learning.

“We have some three-year-olds walking the hallway,” she said of pre-k. “And they know what they are doing. It helps that all the classrooms are connected to one long hallway.”

The school’s enrollment falls in the 250-270 range and is a diverse group. Approximately 52 percent of the students are Caucasian, 40 percent African-American, 5.7 percent Latino and just under 2 percent Asian. The enrollment includes a good number of foster children.

One young Latino boy spoke no English on the first day of school and is learning the language through assimilation. He was a hit at the school’s recent Christmas program when he led the singing of Feliz Navidad from the stage in the school cafetorium. Some parents in the crowd smiled broadly and others brushed away tears to see the young fellow really into it.

There has been an elementary school in Shawmut since the community’s founding in 1908. Class is much different than it was in the early days.

Instead of chalk boards, writing tablets and Coca-Cola pencils, there are iPads and Chromebooks.

“Technology is one of the best things we have going on,” Goodwin said. “The children start off with iPads and move on to Chromebooks. We have Chromebooks for every child in school, and we use them every day. Education is hands on and technology based. There’s lots of movement in the classroom, not just sitting and writing. Our teachers are very creative and good at getting the students involved in a variety of hands-on activities. Even in pre-k, the students take measurements and build things with their hands.”

Goodwin said she likes to celebrate student achievement with the goal of building the students’ self-confidence and self-esteem. In addition to having honor rolls and rewards for high scores in the Accelerated Reader program, Bob Harding-Shawmut has what’s known as positive office referrals.

“It makes their day when they find out there are not in trouble,” she said.

Parents Day is a big event at the school.

“I was amazed at the number of parents we had this year. It was great,” Goodwin said. “A lot of parents come on Fridays to interact with the kids. We are a small school with lots of strong support from our families. It’s really good when men come to the school. The young boys really like that.”

Goodwin commended long-time P.E. teacher Amelia Yates for doing great work in getting the kids into gym activities. “They were scared of P.E. at first, but they love it now,” she said. “Amelia is great in teaching the kids physical skills.”

There are two playgrounds at the school, a small one behind the school for the younger children and a big one on Shawmut Circle for the older children. There’s a recess period after lunch that’s much enjoyed by all the kids.

There’s not much room for boredom at Bob Harding-Shawmut.

“In September, we had Rock Your School, Grandparents’ Day, and pep rallies when the Valley High cheerleaders and Rambo would come out. In October, we had Red Ribbon Week and a motivational speaker from Auburn University visited us. We had trick or treat programs teaching everyone safety at Halloween. We appreciate the Little Boston Club and the PTO for donating candy. In November, we had a Random Acts of Kindness Day, celebrated our Veterans, had a fundraising drive for the Humane Society and had a food drive. In December, we had a Grinch Day at the school, a trip to the merry-go-round and a Christmas singalong for our parents.”

“It’s a good experience for children to be on stage in front of an audience,” she said. “Parents love to see them there.”

Goodwin said that visitors are always welcome at Bob Harding-Shawmut. “Just check in at the office when you get there,” she said. “We are very big on safety. We have lots of cameras at the school. My favorite thing about that is that I can see what’s going on my phone.”

The school has a link to the Chambers County School District website and its own Facebook page. Goodwin encourages everyone to check them out.

“We post lots of pictures,” she said. “We want everyone to know what’s going on at the small school with a great family atmosphere.”