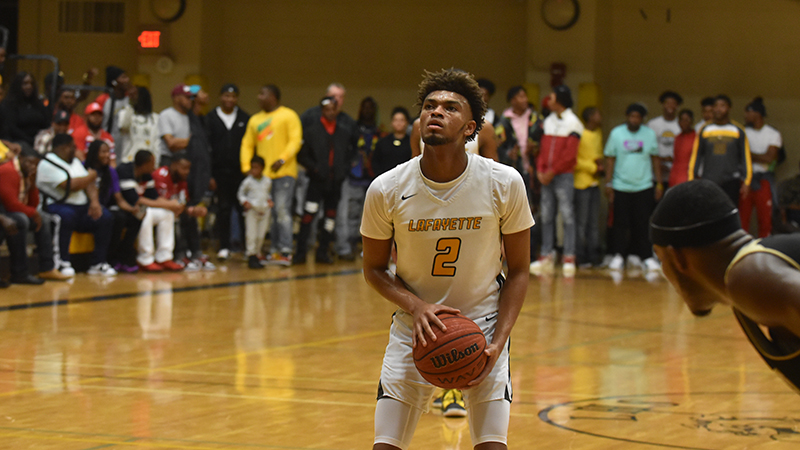 Tae Burton finished with a game-high 35 points in LaFayette’s win against rival Lanett on Friday.-- Photo by Cody Estremera

LaFayette— After trailing all of Friday’s game, the Lanett boys basketball team (2-7) trailed by just one point with less than five minutes left in the game. However, LaFayette (14-0) would not let its lead collapse, pulling away to win the rivalry game 82-71.

“We did just enough to get by them tonight,” LaFayette head coach Obidaiah Threadgill said. “It won’t be that way when we go to their gym. We are better than that.”

The Bulldogs came out fast, taking a nine-point lead early in the game. They were getting past Lanett’s press and getting to the rim, either scoring with ease or reaching the foul line. When they needed to, they were knocking down shots from the outside.

“We were being lazy on defense,” Lanett head coach Richard Carter said. “When you don’t play hard on defense, they get some easy baskets. They shoot the ball really well on the outside. We weren’t closing out the shooters.”

The Panthers offense started off slow but started gaining traction as the quarter went on. LaFayette led by six heading into the second quarter.

Senior guard Tae Burton came out of the huddle on fire in the eight-minute quarter. Burton, who had eight points in the first quarter, dropped 12 of the team’s 21 points in the second quarter. He was constantly getting inside the lane, scoring from in close.

At the halftime break, the Bulldogs’ lead had grown to 14. That’s when Carter lit a spark in his team.

“We had a little come to Jesus meeting in that halftime,” Carter said. “We challenged their manhood, and they decided that they wanted to play a little basketball in the second half.”

The Panthers came out of the break on a tear, cutting the deficit to just five in less than five minutes. The big reason was the Panthers changed their defense. They played the first half in a full-court press, then switched to a half-court trap in the second.

The length of the Panthers played a big role, as they were able to force turnovers and quick points.

“It’s hard to see over Lanett,” Threadgill said. “They’re long. They’re strong, they’re all football guys. It’s hard for us to generate at practice. It’s something that you have to go through. I think tonight is going to make it better for next time.”

The game remained tight, getting as close as one point in the fourth quarter, but the Bulldogs were able to speed up the game, forcing a couple of Panthers turnovers that catapulted them ahead.

Burton led all scorers with 35 points, 15 of which came from beyond the arc.

“Your brightest stars shine the brightest on the biggest stages,” Threadgill said. “It was just his night. He does some things that just make me shake my head. I can let him play. He’s a senior, and he earned that right. He’s in here late at night, early in the day.”

Threadgill said that the senior showed up at the gym at 2 p.m. Friday. The team didn’t have to be there till 4:30.

Junior Kintavious Dozier led the Panthers in scoring with 20 points, while seniors Kristian Story and Zameron Boozer combined for 25, scoring 15 and 10 respectively.

The Panthers are back in action on Saturday when they play Hanley at home for just their third home game of the year.

The Bulldogs go on the road for their Saturday game, when they play Bullock County.