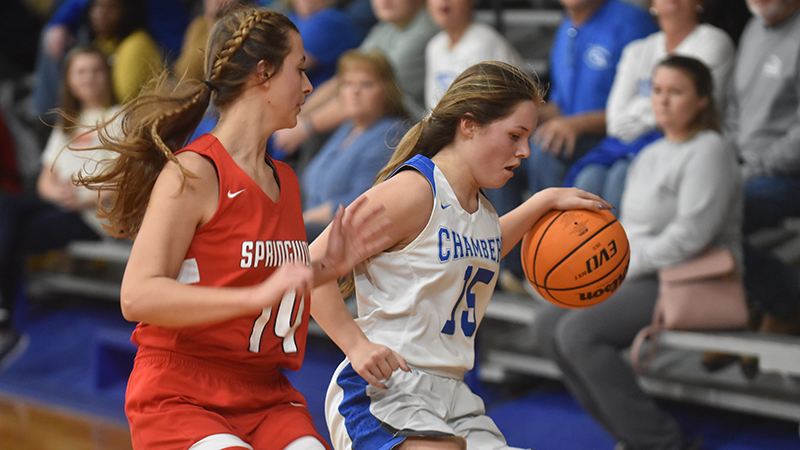 Chambers Academy guard Lizzie Keebler drives against Springwood’s McKayla Barber in the team’s matchup in the first round of the Chambers CF tournament. -- File Photo

Rivalries always bring out the best of sports. Some of the biggest rivalries have the best moments in sports history. The Chambers Academy-Springwood rivalry adds another chapter on Thursday when the Rebels travel to Lanett to play the Wildcats.

“It means a lot,” Chambers Academy senior guard Shelly Keebler said. “We want to take a win at their house… They’re a ranked team, and we’re not yet, so it would be huge for us.”

Both teams have two seniors on their roster. On the Springwood side, there is guard McKayla Barber and forward Andie Martin. For Chambers, there are the Keebler sisters.

“We know them really well because we’ve played them all these years,” Shelly Keebler said.

The rivalry translates from grass to the hardwood for the Keebler sisters. Since Chambers has been so dominant on the gridiron, they feel basketball is a chance for the Wildcats to seek their revenge.

“They want to beat us. They want to say, ‘you might have beaten us at football, but we’re going to beat you at everything else,” Lizzie said. “We want to go a full year without them beating us.”

The last time the two teams squared off, the Wildcats won the game by seven. There were a couple of stretches in that game where Chambers struggled to hold the ball or find the bottom of the net.

Since starting back up in 2020, the Rebels have experienced growth in their biggest problem area— turnovers. They have started to control the pace better, turning the ball over about 15 times a game, down from close to 30 a game early in the year.

That is a huge drop, especially since Springwood likes to play a full-court press that excels on forcing turnovers.

In that late December game, the Wildcats pressed the Rebels for most of the game, which took a toll on the Rebels as they only dress eight players.

“That was a rough game,” Shelly said. “I remember being exhausted after that.”

Thursday’s game will be the second-straight contest that the Rebels will play a ranked team, as they played Lee-Scott on Tuesday.

On the Springwood side, the Wildcats have dominated most of the year as they are the No. 8 team in AISA. They took their first loss of the new year when they lost to Evangel by 12.

The first of four games is scheduled to tip off at 5 p.m.