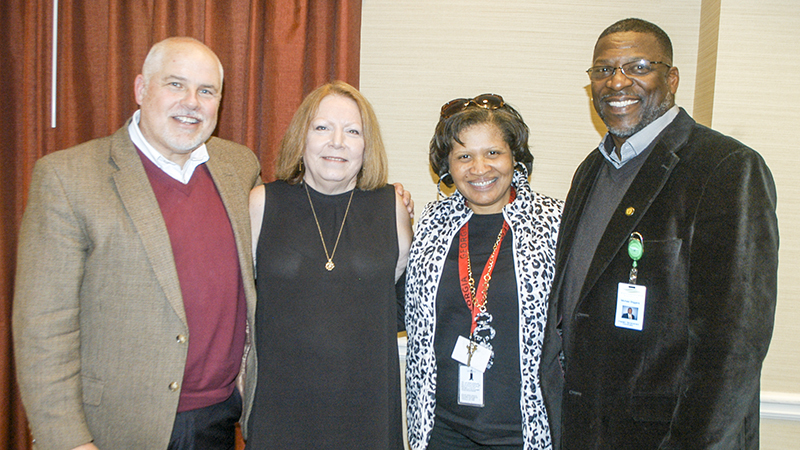 On Thursday afternoon, supporters of Chattahoochee Hospice had the opportunity to thank an outgoing chaplain and to welcome a new one. The Rev. Mark McGee (far left), the chaplain who is leaving, and Rev. Michael Stiggers (far right), the one coming aboard, are shown above with their wives, Connie McGee and Cheryl Stiggers.

LANETT — A reception was held Tuesday afternoon in the River Room at the Lanett Hampton Inn & Suites to thank an outgoing chaplain for Chattahoochee Hospice and to welcome the new one.

The new chaplain, the Rev. Michael Stiggers, is no stranger to hospice. It’s just that he will be doing it closer to home now. He’s been a hospice chaplain for years in many places outside Chambers County while serving as pastor of Mount Pisgah Baptist Church near LaFayette. His wife Cheryl has taught in the Muscogee County School System since 1983, the year they were married.

“There’s a really good group of people to work with at Chattahoochee Hospice,” he said. “There’s a staff of 17 people and 28 very reliable volunteers.”

Stiggers said there are times in everyone’s life when they grieve.

“But people don’t grieve the same,” he said. “One of God’s greatest gifts is the understanding you can’t do anything to make it better for someone who is grieving, but being there matters. People will forget what you may have done or said to them in a time of grief, but they won’t forget you having been there for them.”

The River Room was packed with well-wishers who came and went during the two-hour reception. All of them came by to thank McGee for what he has meant to Chattahoochee Hospice and to welcome Stiggers in his new role as hospice chaplain.

“Hospice has been very rewarding to me,” McGee said. “Connie and I won’t be leaving the area. We’ll still be here, and people can call on us anytime.”

McGee thanked the staff for their work for the organization and Hilda Jones for her work as a volunteer coordinator.

The McGees have two children, Son Brook lives in the local area and daughter Ansley lives with her husband Shea in Roswell, Georgia.

“I am really enjoying being at Fairfax First Baptist,” McGee said. “It has had a strong presence in the community for a long time. It’s a privilege to pastor a church with so many good people.”

Stiggers has worked in hospice programs throughout Alabama and Georgia and has preached at funerals all across the eastern U.S.

“When you get to know families, you learn that they have loved ones scattered all over,” he said. “There are times you need to be there for them in distant places.”

As the new chaplain for Chattahoochee Hospice, he can now spend more time in Chambers County.