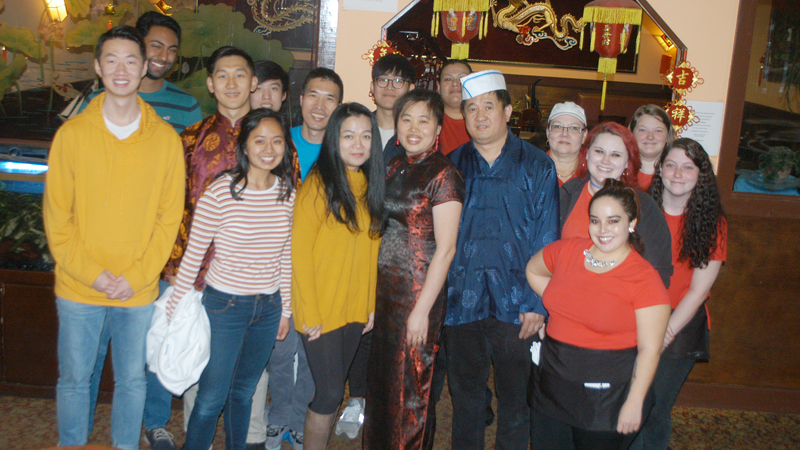 The staff of China Moon Restaurant in Lanett celebrated the arrival of the Year of the Rat this past weekend. Their loyal customers were treated to free meals. In front, from left, are Mark Wang, Elizabeth Jun, Canlice Wang, owners Jan Zeng and Bilan He, and Alexis Smith. In back, l-r, are Ananth Reddy, Simon He, Jake Wang, Zhong Kong Wang, Becky Phanthavady, Deona Isbell, Payton Albright, Samantha Moore and Ashley Gragg. --Wayne Clark

LANETT — The China Moon Chinese Restaurant was a packed place this past weekend as lots of local people came to celebrate the Chinese New Year with owners Bilan He and Jan Zeng, Bilan and Jan have owned China Moon for the past 21 years. Over the weekend, their long-time loyal customers received free meals.

Milan and Jan are naturalized U.S. citizens; Bilan has been in the U.S. since 1989 and Jan since 1993, They were married before they moved here and have many relatives both in the U.S. and in the home country. They are originally from Fujian, China, not far from Taiwan. Jan’s parents are still there and do not speak English. They are in their seventies, and Jan calls them every day.

“We stay in touch,” Jan said. “I speak to their in Mandarin Chinese. It’s so good that I can see them when I am talking to them.”

Jan said that she and Bilan are worried about the coronavirus that’s spreading in the Wuhan region of China. “Wuhan is a long way from where they live,” she said, “but I am asking them to take precautions, to try to stay home as much as they can.”

Milan and Jan have two grown children. Their daughter, Mary Ann, is a registered nurse working in an intensive care unit in UAB Hospital in Birmingham.

Their son, Simon, is majoring in medicine at Emory University in Atlanta. Both are graduates of Springwood School.

Like many people in China, Bilan and Jan saw the U.S. as the land of the free and home of the brave long before they got here. “We love the United States,” Jan said. “We had rather be here than anyone else in the world, so would everyone else in our family.”

Milan and Jan like to maintain cultural traditions, such as celebrating the arrival of the Lunar New Year. The first day of the Chinese New Year begins on the new moon that appears between Jan. 21 and Feb. 20. That took place this year this past Saturday.