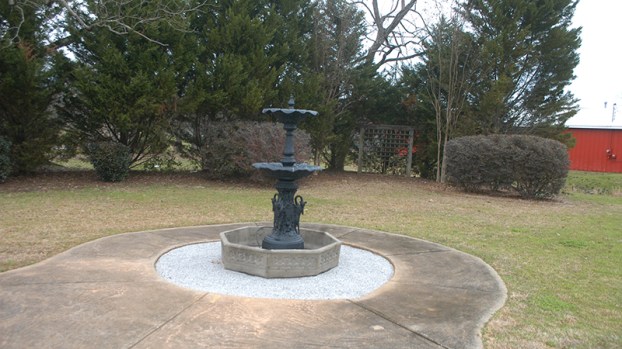 A fountain that has been in downtown Lanett for more than 50 years is now the central feature of Dean Park. --Wayne Clark

LANETT — A fountain that was placed in downtown Lanett more than 50 years ago was taken down last year to make room for a much bigger one.

It could have easily been discarded but will instead be given new life at a new location. That original fountain has been sandblasted and recoated and is now the central feature of Dean Park, just across the street from Lanett City Hall.

“David James did a great job in getting it ready for a new location,” Mayor Kyle McCoy said. “He had to take off a lot of layers of paint. In doing so, it revealed some features I didn’t know were there. Ponder’s Nursery provided a new concrete base for the fountain and did a nice job with the landscaping on the site. Hunter Cook is our fountain expert. He will get it all hooked up and working again.”

McCoy has a sentimental reason for having a new downtown fountain and seeing that the old one has a new home. Fifty years ago, his dad, the late Pete McCoy, was a council member in Lanett and oversaw the construction of the first fountain, which went into operation in the fall of 1969.

For years, the triangle fountain was maintained by the Town and Country Garden Club. “Lanett was a special place to them, and they wanted to keep it that way,” McCoy said. “They left us a legacy we’d like to continue.”

McCoy said that several different locations were considered as a new home for the old fountain, but that Dean Park seemed ideal. It gets its name from the Dean family of Dean’s Upholstery Shop, which was once located there.

The mayor is enthused about the final phase of the North Lanier Avenue streetscape. It will be along the east side of the street from the Tanyard Creek bridge to Cherry Drive. It will be much like what’s previously been done with the wide sidewalks and planters. Something different will be the replacements of 14 utility poles with 40-foot-high metal poles. They will have decorative lighting and the lines will be higher.

The landscaping work along North Lanier is being done by Frank Ponder IV. He’s the sixth member of the Ponder family to have earned a degree in horticulture from Auburn University.

“He loves what he does,” said his dad, Frank III. “He grew up around it and is really running with it now. Tin Kant has done a great job of advising us on this project. Anyone who has been to Fairhope (Alabama) can see the amazing work he can do. He was the mayor there for 16 years.”

Prominent among the recent plantings is a row of Liberty hollies near the intersection of Cherry Drive and North Lanier. The large tree at the tip of the triangle in the downtown area is a willow oak.

“There’s a number of Bosc elms,” Frank III said. “They are ideal for a downtown streetscape.”

Ponder said he has really enjoyed being involved in the project and finds it rewarding to have made a difference in the town’s appearance.

No doubt the Creek Indians would like it that yaupon hollies have been among the plantings. Yaupon leaves were used to make a black drink very similar to coffee. Yaupon is the only plant native to North America that produces caffeine.

For each phase of the streetscape project, the Muscogee band of the Creek Nation has to sign off on construction work since it’s a publicly-funded project on their historic tribal lands.