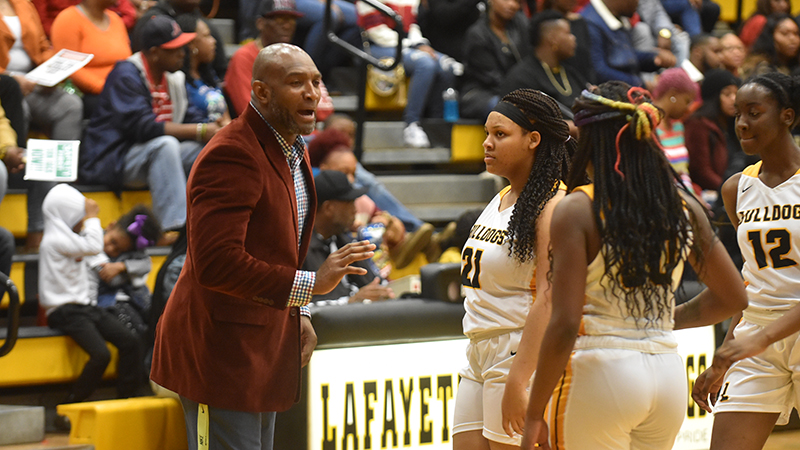 LaFayette head coach Fred Bridges talks with his team during a timeout. --Photo by Cody Estremera

When the two teams matched up on Jan. 3, the LaFayette girls basketball team held on to defeat Lanett 53-51.

In that game, the Bulldogs used their press to cause problems for the Panthers, as they were able to force key turnovers late in the game.

The Panthers are coming into the game on a three-game winning streak. Their schedule has slowed down, so they have been able to rest their bodies and get into the gym and work on their shots.

The Bulldogs have been on a tear since the new year started, as they have won five straight. They host Opelika on Thursday.

After losing a close game against Ranburne to start their area play, the Bulldogs have won their last three area games by an 85-point margin.

The rematch between the Panthers and Bulldogs is set for Friday.

The Bulldogs have owned the series the last couple of years, as they have won four of the last six matchups.

“We can’t keep losing to them, because we have too much heart to keep losing to LaFayette,” Lanett junior center Alyse Madden said. “It doesn’t have anything to do with we hate them and the people. It’s more of they’re supposed to be the old school, and we’re the new school. We’re here now.”

Greer has been one of the most dynamic players on the LaFayette roster, but she originally began her career as a Panther.

“I grew up playing with these girls, so it’s really competitive,” Greer said. “When we’re on the court, we aren’t friends anymore until the game is over. I know they’re game, and they know mine.”

Greer and Madden are close off the court, but that doesn’t matter on the court.

“She’s like my sister, but we’re going to play hard,” Madden said. “Win or lose, we’re still going to love each other.”

The pair play on the same AAU team, so they know how the other likes to play. Both said they bring out the best in each other.

“I push her to greatness, and she does the same to me,” Greer said.

Both teams feel that they have taken a step in their development since the last time they played each other. The players feel this development will give them an edge early in the game.

“This time we’re going to put it away quickly,” Lanett forward Brenna Glaze said. “It’s going to be a quick and easy game.”

Madden agreed with her teammate.

Greer feels the Panthers won’t be able to stop the Bulldogs’ offense.

“We’re going to put them away really early,” Greer said. “Last time we played around. Our tempo is going to be better this time.”

The first of three games is set for 5 p.m. on Friday.