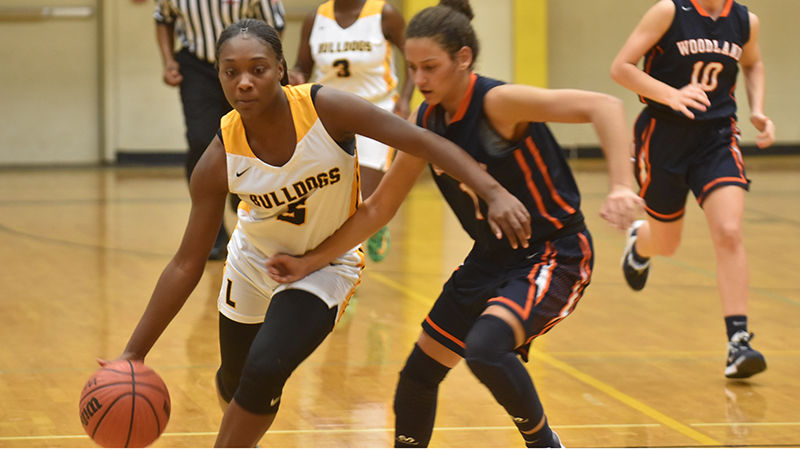 LaFayette junior Alahbra’J Todd breaks Woodlawn’s press to get the ball across half court.-- Photo by Cody Estremera

LAFAYETTE — The Lafayette girls basketball team claimed its second area win of the season with a 62-25 win Thursday against Woodlawn.

The first half was a tightly contested game, as the Bulldogs trailed by one entering the halftime break. They had forced shots and turned the ball over the opening 16 minutes of the game. They looked sluggish, so head coach Fred Bridges halftime speech was about getting the team’s energy up.

“I just came in and gave them the scenario of what could happen in the region if we didn’t come out and play hard to win,” Bridges said.

His speech worked, as the Bulldogs demolished the Bobcats in the second half, outscoring the area foe by 38.

The big difference was the way the Bulldogs attacked Woodlawn’s zone. The Bobcats sat in a 1-1-3 zone (where one player pressures the ball, one player is in the middle of the floor and three are back behind half court protecting the wings and paint). The Bulldogs were able to make outlet passes and create shots from the corners in the second half that were not there in the first.

“We were kind of looking for the soft spots in the zone where we were able to take a lot of shots,” Bridges said. “When they were closing out hard, we were able to drive to the basket.”

After having only two points in the first half, junior forward Feliah Greer dominated the second half. She finished with 21 points, with 12 coming in the third quarter. She was able to go the foul line nine times, hitting six in the quarter.

“She was a little under the weather tonight, but you couldn’t tell the way she was playing,” Bridges said. “You pretty much know what you’re going to get from Feliah. She’s a hard worker. She has an eye for the game.”

Alongside her were Alahbra’J Todd and Ebony Williams, who combined for 27 points.

The Bulldogs rematch Ranburne on Friday. In the earlier matchup, the Bulldogs lost by three.