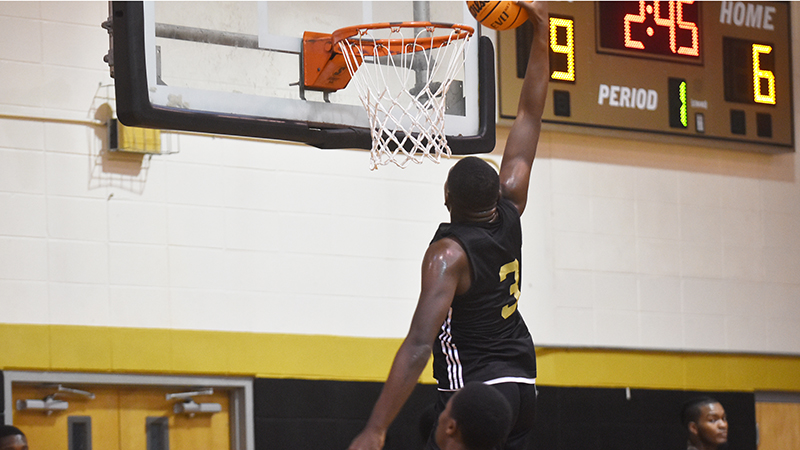 Lanett forward Travuanta Abner rises up during practice for a dunk.

In the first installment of the Alabama Sports Writers Association basketball rankings, the LaFayette Bulldogs were ranked No. 1 in 2A, while the Lanett Panthers were the No. 2 team in 1A.

Both teams hope to live up to those lofty expectations. LaFayette is 13-0, while the Panthers are 2-6 coming off a football state championship.

Both teams know their records go out the door on Friday when the two tip-off.

In the last three years, the rivals have met 10 times, and the Panthers hold a 7-3 lead in the series in those 10 games, including two area championship wins and a playoff win.

“LaFayette is the kind of basketball team that brings out the best in you,” Lanett head coach Richard Carter said. “Both teams desire to bring a state championship back to Chambers County. To play a championship team, it’s a great challenge.”

Both teams are loaded with experience.

The Bulldogs have a roster of 11 seniors, most of which have been playing together since they were in grade school.

“I would think their team chemistry may be better than any [team in any] classification, one through seven, because they have played together so long,” Carter said. “I think that’s one of the most important things in a basketball team. The closeness between the team, where there is no jealousy.  They don’t care who makes the baskets. They don’t care who gets the rebounds. Their goal is to win a state championship, and that’s the way championship teams are.”

The Panthers have five seniors on their roster. Most of their team has at least one state championship ring, either in football or basketball.

Kristian Story, who has been playing on varsity since the eighth grade, has the most with five.

“They have a lot of experience and size on the inside,” Threadgill said. “They’re champions. They know how to win. I’m expecting a four-quarter clash of the gladiators.”

Lanett has lost its six games by a total of 29 points this year, 18 of which came in the team’s first game of the year. In the other five losses, only one has been by two possessions.

Carter believes part of that is because the team is still adjusting from football, and it is still getting its basketball IQ to where it was the last couple of years.

“We’ve been lacking in that, and we’ve been making silly mistakes,” Carter said. “We’re taking threes when we should probably be driving to the rack and taking layups. We’re rushing ourselves because the timing is off.”

In the Panthers’ Thursday practice, Carter believes his squad took a couple of steps forward in their basketball IQ.

To help simulate the Panthers’ size, former Bulldogs practiced with Threadgill’s squad. The former players scrimmaged and went through different situations with the team during the New Year’s Eve practice.

“I’m forever grateful to these guys, but they remember being here and getting these same speeches,” Threadgill said. “These guys always come and always share. They’re only a phone call away, and often, they call me, especially during Lanett week.”

“You have some top-notch athletes in small schools. This is going to be electric,” Threadgill said. “It’s definitely one of those games that if I didn’t coach basketball I would definitely go to. I would spend the $6 or $7 to get in. I wouldn’t even want to get in for free because I know you’re going to get your money’s worth.”