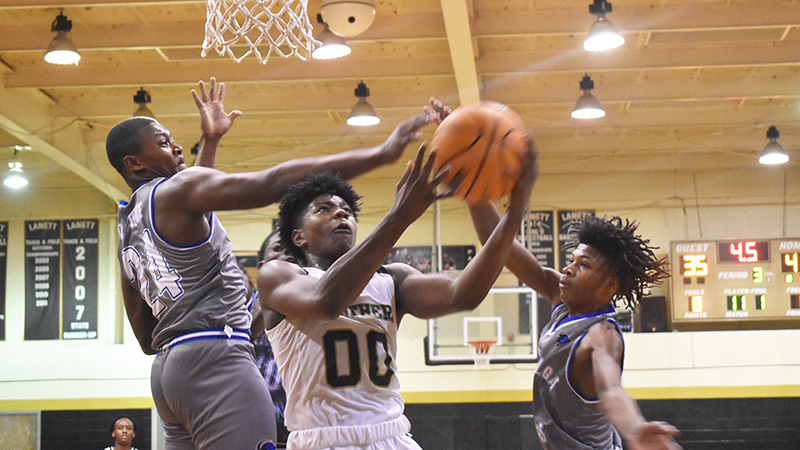 Lanett point guard Kintavious Dozier splits a pair of Notasulga defenders on the way to the rim.

With a little more than a minute left in the game, the Lanett boys basketball team’s lead stood at four. The Panthers had started fast but started to fade down the stretch. It was able to make a pair of defensive stops and hold on to the game, defeating Notasulga 57-51 on Tuesday.

“We didn’t play very well because we didn’t practice very well yesterday. We came out today and just fumbled around,” Lanett head coach Richard Carter said. “We didn’t play well, not at all. If we had, the score would have been a lot different.

The Panthers started the game hot, hitting six of their first eight shots. Point guard Kintavious Dozier hit five of the first seven shots himself. The junior was able to take advantage of the Blue Devils’ zone and hit three shots from beyond the arc to start the game.

“He’s a really good player, no doubt about it,” Carter said. “We just have to build on what we’re doing.”

The Bule Devils made a switch to their defense, switching from zone to man-to-man. This slowed the Panthers’ offensive production since they were not getting the open looks from outside the arc. At the end of the first half, the Panthers lead had been cut to four.

Just like he did in the first quarter, Dozier went to work, scoring eight of the team’s 17 points in the third quarter. Unlike the first, he did most of his damage on the inside, scoring around the rim.

Kristian Story provided the offensive spark in the fourth quarter, as he scored six of his nine points in the final eight minutes.

“That’s really big because that’s what we want [going undefeated so far in area play],” Carter said. “We want to win the area, so we can host the area tournament. My only thing is, you play people that close at home, and you give them hope. We don’t want to do that.”

The Panthers are back in action on Friday when they host rival LaFayette.