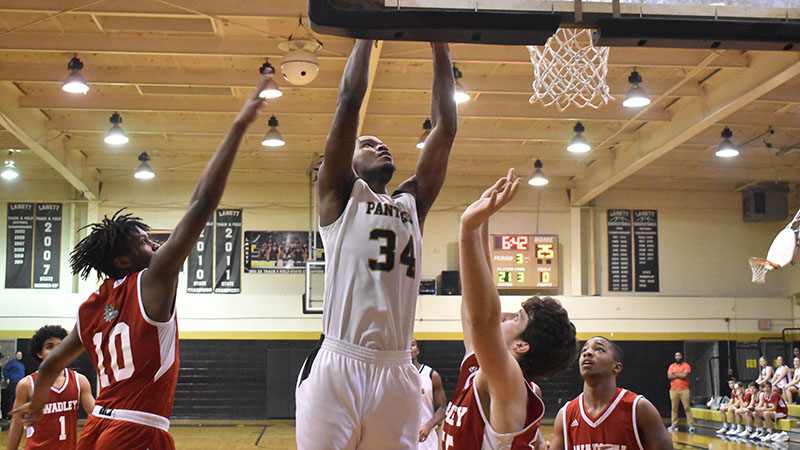 Lanett senior center Cameron Boozer dunks over a Wadley defender in the Panthers win on Monday.

The Lanett boys basketball team started slowly, but it was able to get hot in the second half, as it defeated Wadley 62-45. With the win, the Panthers finish a perfect 6-0 in their area.

“We’ve done that the last few years, so we expect to do that,” head coach Richard Carter said.

At the end of the first quarter, the Panthers trailed 12-8. They were struggling to hit shots from the outside, and they were turning the ball over inside the paint.

“It was senior night, so I wanted to start all the seniors. We had a lineup that doesn’t normally play together,” Carter said. “Because of the lack of practice time, I was trying. To go out and play a defense that we had not played all year. We were trying to practice it to see what we could do with it later on.”

The Panthers started to get into their normal rhythm in the second quarter. They were able to take a lead midway through the quarter but faltered down the stretch, going into the halftime break down four.

Coming out of the halftime break, the Panthers’ offensive plan was simple, get the ball inside to the Boozer brothers. Each brother stands more than 6-foot-8, which is a big advantage as the tallest Bulldog is listed at six feet.

“They’re always important,” Carter said. “They’re big, they’re the biggest players in this league, and we need to make a living off of those guys. We try to play the game inside out. They played the game really well tonight.”

The Brothers scored 13 of the Panthers’ 20 third-quarter points.

At the end of the third quarter, the Panthers had a three-point lead.

In the fourth, the Panthers put the game out of reach, as they were able to go inside to Zameron Boozer, who scored eight points in the quarter. Both Boozers were able to cause problems of the Bulldogs defensively. They were able to get a couple of blocks and rebound over the smaller Bulldogs. Overall, Wadley scored just six points in the final quarter, while Lanett scored 21.