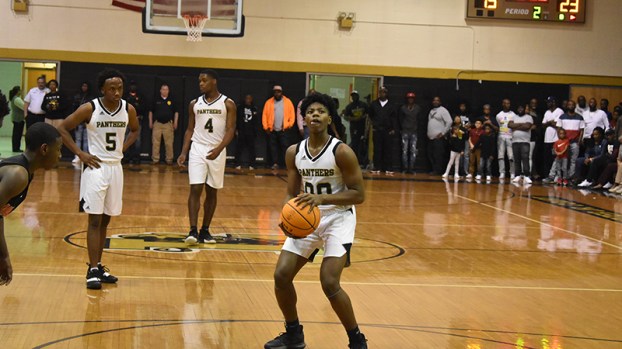 Lanett guard Kintavious Doizer shoots one of his 11 free-throw attempts against Valley. --Photo by Cody Estremera

With its blowout win at Loachapoka and a nine-point win at Wadley, the Lanett boys basketball team is poised to take control of 1A Region 6.

The Panthers face the toughest team in region 6 on Tuesday when they host Notasulga.

“Area games are so important because it gives you the opportunity to have the home-court advantage in the area tournament,” Lanett head coach Richard Carter said.

The Blue Devils are 8-4 on the season but 2-0 in the area. They blew out Wadley, winning by 28 points but slipped by Loachapoka, winning by two.

“They won’t be as big a basketball team as we are, but they’ll be very scrappy,” Carter said. “They shoot the basketball really well. They’re going to apply pressure.”

The two players Carter said they would have to watch out for were Jayquan Lindsay and Jakerious Simmons.

The last time the Panthers played, they blew out Valley 88-57. In that game, junior guard Kintavious “Ken-Ken” Dozier went off, scoring 37 points.

The junior was able to get to the foul line 11 times, hitting 10. He also hit four shots from beyond the arc.

“He was just Ken-Ken,” Carter said after the game. “He just does what he can do.”

Dozier has been dominant in his first year at Lanett, stepping up in big games. Against LaFayette, Dozier led the team with 20, and he led the team against Wadley, again scoring 20 points.

One of Dozier’s best qualities as the team’s point guard is he can penetrate. Against Valley, the 5-foot-10 guard was able to get inside almost at will. He also has the body control to finish through contact near the rim. Once again in the Valley game, he would drive and finish at the rim, avoiding the Rams best shot blocker Quez Trammell.

Since losing to LaFayette 11 days ago, Carter has made a change to his starting lineup, moving Quae Houston into the starting group.

“Its something that we’ve been talking about,” Carter said. “With the two big players on the floor at the same time, sometimes is good for us to do that. But when people have that size, but the people we are playing we need to match up guards for guards. Plus we’re getting our guards engaged in rebounding.

“We’re trying to look for matchups.”

The first of three games is set to tip off at 5 p.m.

Since its football team played in the state championship game, it took some time for the Chambers Academy boys basketball... read more