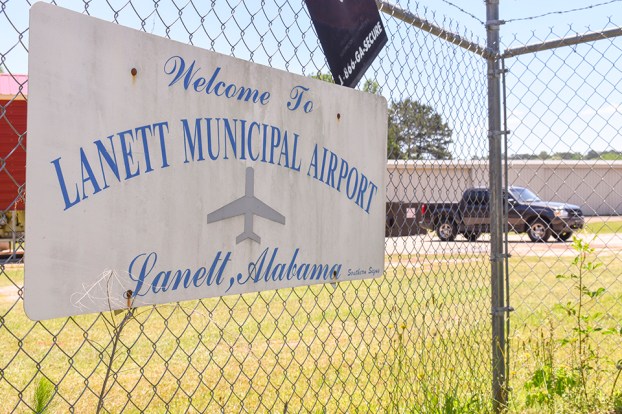 Pictured is a sign at the Lanett Municipal Airport Tuesday. The airport received $8.1 million grant from the U.S. Department of Transportation will extend the runway by 1,000 feet and will allow the airport to accommodate modern business jets. — Dustin Duncan

LANETT — In its first meeting of the new year on Monday, the Lanett City Council awarded a contract to build a new airport terminal and agreed to purchase about eight acres of land bordering the airport site.

River City Contracting, Inc. of Columbus, was the low bidder on the project. Work will start on the 5,400-square-foot building in late January or early February. According to Jordan Russell, a transportation engineer for Goodwyn, Mills & Cawood, it should take about eight-and-a-half months to complete. The new terminal will have a new office for the Chambers County Development Authority (CCDA).

The property adjacent to the airport is being purchased from Daphney B. Knight for $135,000. The Lanett Municipal Airport has been closed for about two years while two runway expansion projects have been taking place. The first one lengthened the runway from 3,300 feet to 4,400 feet. The one that’s taking place now will extend the runway to more than 5,400 feet, making it longer than the existing runway in Auburn. The work is being funded by an $8.1 million Federal Aviation Administration (FAA) grant.

In other action Monday, a first reading was held for an ordinance to renew an existing internet, cable and phone franchise for ITC Globe, Inc. (doing business as WOW! Internet, Cable and Phone). The ordinance could be approved following a second reading at the council’s next meeting. A copy of the 30-page document is in the city clerk’s office in case anyone wants to review it before the next meeting. The council previously approved a similar franchise for Charter Spectrum.

The council unanimously approved a resolution for the city to participate in this year’s Severe Weather Preparedness Sales Tax Holiday.

This year’s tax holiday begins at 12:01 a.m. on Friday, Feb. 21 and extends through midnight on Sunday, Feb. 23. State and local sales taxes will be exempted from a host of items people purchase to be prepared for severe weather (i.e., flashlights, batteries, candles, rain gear. etc.).

Greater Valley Area Chamber of Commerce Executive Director Carrie Royster was present at the meeting to present a quarterly report of Chamber activities. She thanked Captain Matt Shiver and firefighter/paramedic Noah Hurst of Lanett Fire & EMS for conducting CPR training for 19 junior ambassadors at the Chamber office on Saturday, Dec. 7.

“I’m proud to say that they are now all CPR certified,” Royster said.

During the past quarter, the Chamber hosted a Lunch ‘N’ Learn program to review labor laws. In March, they will be hosting a Catch Up Over Coffee event at Daylight Donuts in Lanett. A well-attended Chamber event this past quarter took place at the Valley campus of Southern Union State Community College, where an estimated 650 junior and senior students looked at the educational opportunities available at SUSCC.

Councilman Charles Looser said he was looking forward to 2020 being another good year for Lanett.

“I am looking forward to finishing some projects we have underway,” he said.