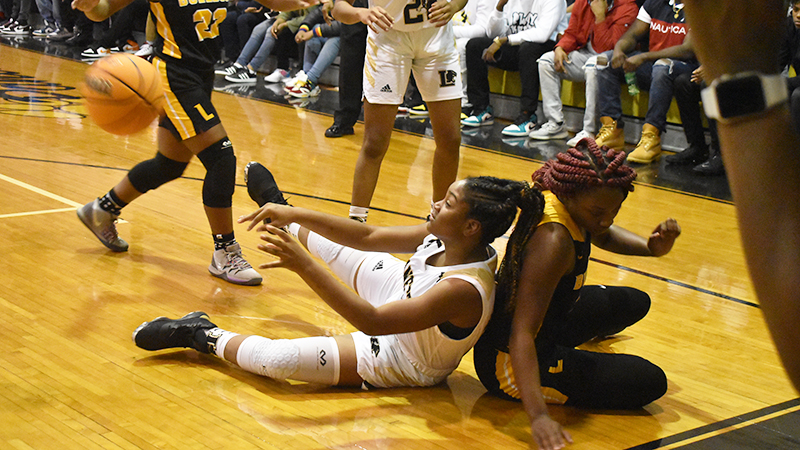 LANETT— With LaFayette up one and time ticking under four seconds, Lanett forward Alyse Madden drove fired a shot that clanged off the backboard. She collected her own miss and laid the ball off the backboard. The shot fell, giving the Panthers a 39-37 win.

“They’re [the Lanett players] are so young that they don’t understand the moment,” Lanett head coach Charlie Williams said. “They’re just out there playing, looking around like a newborn baby.  I just told them to keep their poise and keep calm.”

With the win, the Panthers avoid the season sweep.

The Panthers ended the first quarter up five, as they were able to score inside. Junior guard Ebony Williams was the only offense for the Bulldogs, as she scored eight of the team’s 10 points.

Both team’s defense proved to play a big role in the second quarter, as there were only 12 points scored in the quarter.

“I was very pleased with them defensively,” Williams said. “Samahria Davidson did an outstanding job on defense

After trailing by nine at the half, the Bulldogs came out on fire in the third on fire. Williams did most of the damage again, as she hit a trio of shots from beyond the arc. At the end of the third quarter, the Bulldogs had a two-point advantage.

Just as it did in the second quarter, the Panthers defense was able to take over the quarter, as they allowed just seven points. Of those seven points, five came from the free-throw line.

The Panthers were able to slow junior Feliah Greer the entire game. Greer, who scored 30 points in the first matchup earlier this month, scored just seven points. Lanett was able to keep a girl in front of her at all times, making her be a playmaker for most of the time.

“We just defended,”  Williams said. “She had some easy ones that just rolled out on her. She was getting the shots, she just wasn’t making them. It just goes that way sometimes.

This allowed Willaims to take over. She was able to get a couple of open looks from beyond the arc, which she was able to convert, knocking down five 3-point attempts.