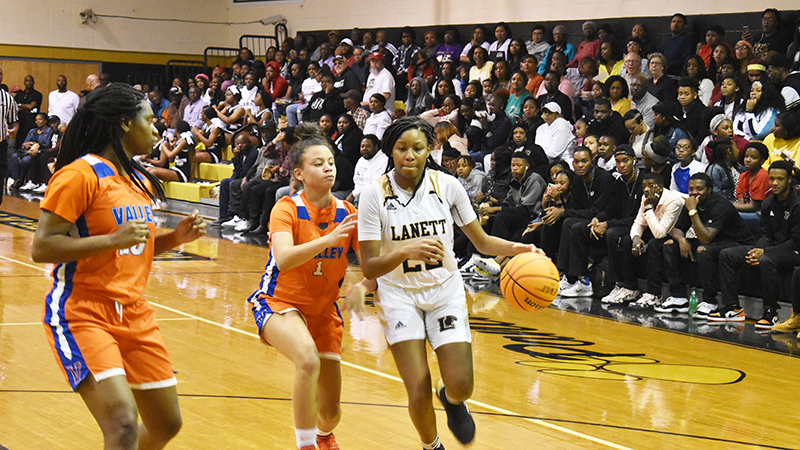 Lanett forward Brenna Glaze drives to the rim in Lanett’s win against Valley.

With 30 seconds left in the game, the Lanett girls basketball team led by two against Valley. The Panthers got a steal and threw the ball ahead to junior forward Alyse Madden, who was fouled on the layup attempt.

She made one of the two free throws, and since the foul had been a flagrant, she took out the ball. Instead of inbounding the ball to a teammate, she threw it off a Rams’ player back, collected the loose ball and scored a layup, ending the game win a 37-32 win.

For the most part, the game was tightly contested the entire 32 minutes.

Neither team was able to do much offensively in the first quarter, scoring a combined eight points.

Both teams adjusted and found ways to score in the second quarter. Lanett outscored Valley by six in the quarter, taking a four-point lead into halftime.

“We always start off the game so slow,” Williams said. “I’ve been trying to think of remedies to start off faster. Once they settle in, it gets better. We’re a scrappy team. They just don’t know how to settle in and be consistent on the defensive side.”

Both sides came out strong defensively in the second half, as Lanett held Valley to five points in the third, including only three points the first 4:52 of the quarter, while the Rams allowed just four points in that same 4:52.

The Panthers started the fourth quarter strong, building a nine-point lead, but the Rams got back into the game.

“Honestly, we had every opportunity [to tie the game],” Valley head coach George Grimes said. “We had chances at the line, and we had chances on the floor. It just wasn’t our night.”

Madden, who normally one of the Panthers’ biggest threats on offense, was in foul trouble for most of the game, picking up her fourth foul midway through the fourth quarter.

Valley is back in action when it travels to Brewbaker, while Lanett hosts Notasulga. Both games are on Tuesday.