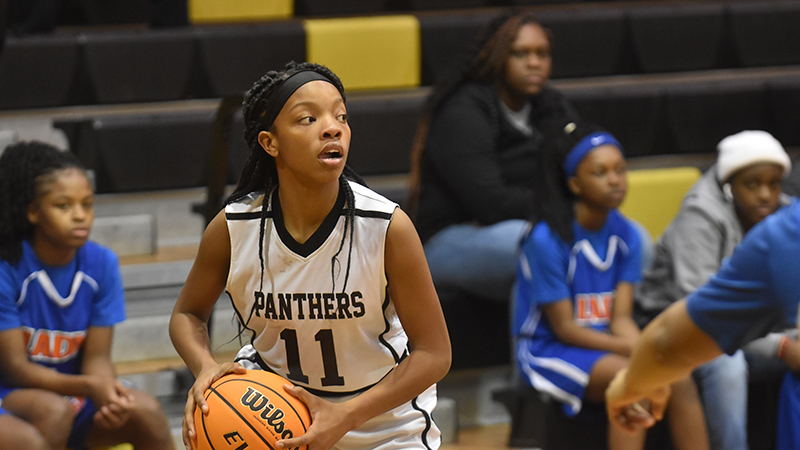 The Lanett junior high girls basketball team only allowed 19 points in the two matchups against Valley this season.-- Photo by Cody Estremera

LANETT— The Lanett junior high girls team took an early lead and never looked back, defeating Valley 24-11 on Monday night. The win gives the Panthers a season sweep in the cross-town rivalry.

“It means a lot for our program,” Lanett head coach Earnest Webb said. “Like I told [Lanett girls varsity head coach] Charlie Williams, we’re trying to build a program here at Lanett. We’re not going backward. Our main goal is to go out and compete.”

Webb credits the team’s defensive success to Williams as the two practice against one another throughout the season.

“I take my hat off to the girls,” Webb said. “They’re buying into the system. If they continue to buy in, we’re going to be great in a couple of years.”

The Rams managed only 19 points in two games against Lanett this year.

Alongside the defense, Webb’s group was able to strike from the outside, drilling three shots from beyond the arc.

“We shot the ball a little bit better,” Webb said. “All our guards are coming around. It’s my job to develop guards.”

Along with the three-ball, the Panthers were able to share the scoring load, as three Panthers finished with a team-high five points.

Only three Rams were able to score.

Valley is back in action on Wednesday at 5 p.m. when it travels to Sanford, while Lanett will travel to LaFayette to play the Bulldogs at 5:30 p.m.  on Wednesday.