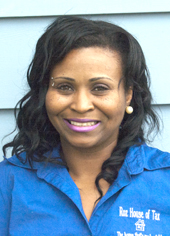 LANETT — A Lanett tax preparer accused of having a hand in the filing of fraudulent tax returns has been sentenced to 46 months in federal prison.

Gladys Rosalyn McCauley, 43, owned and operated the Roz House of Tax for five years. The business is located on Gilmer Avenue across from Kroger.

Prosecutors with the U.S. Department of Justice claimed that McCauley made numerous false claims to the IRS, resulting in the loss of an estimated $1.5 million to the federal government.

Court documents maintain that McCauley collected fees as a percentage of tax refunds she claimed for her customers. Prosecutors alleged that she increased those refunds by making false claims such as education and child tax credits clients weren’t entitled to. In other instances, she would claim a client had significant business losses that had not taken place, court records reveal.

“For far too long, opportunistic tax preparers like Ms. McCauley have preyed upon the unwitting taxpayers residing in this district,” said U.S. Attorney Louis V. Franklin Sr. “As was the case here, preparers attempt to make money by putting false information on the tax returns of others. In doing so, the preparer subjects their customers to possible future scrutiny by the IRS while they pocket money that should have gone to the public’s benefit. This conduct must stop. Hopefully, Ms. McCauley’s sentence will cause other tax return preparers who have considered running schemes like this to honestly and accurately prepare tax returns.”