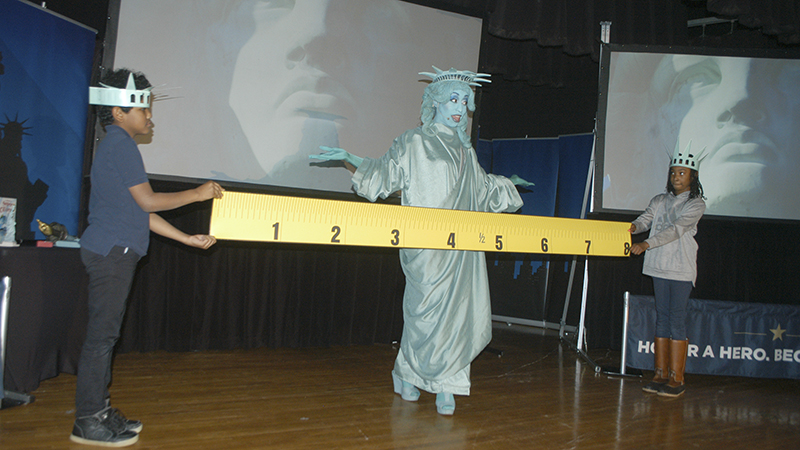 Libby Liberty amazed W.O. Lance students Tuesday morning by showing them how wide her mouth is when she’s on her pedestal in New York Harbor. It’s over three feet wide. Her nose is four-and-a-half feet long, her fingers eight feet long and she wears a size 879 shoe. Holding the oversized tape measure are W.O. Lance students Kareem Abdullah (left) and Aiyanna Billingsley (right).

LANETT — The Libby Liberty bus rolled into Lanett on Tuesday, and Libby herself rallied a large group of second and third grade students at W.O. Lance Elementary School to support the Super Citizen program.

The program is brought to local schools by the Liberty Learning Foundation, a non-profit organization facilitating active, immersive civics and character programs in K-12 classrooms and orchestrating local events that empower schools, parents, local leaders and businesses to take ownership in the future of the community and country.

The goal of the program is to teach civics, character, financial literacy, careers and social studies through the lens of great American ideals and civic responsibility. Libby Liberty’s presentation at W.O. Lance took place at no cost to the school thanks to private donations by the Chambers County Community Alliance.

Ay 1 p.m.. the students were seated in the multipurpose room when Zarian Beatty and Dimauri Henry went to the stage to lead them in the Pledge of Allegiance. The place erupted in some thunderous cheering when Libby Liberty walked on stage. Just like the big statue in New York Harbor, she was dressed in a robe, wearing a seven-spike crown and carrying a torch in her right hand and a tablet in her left. Her torch was lit and the tablet bore the date July 4, 1776.

“I’ve come down off my pedestal to tour this country,” she told the children. “You children are our future and the most important part of our country.”

She drew gasps of amazement when she gave her dimensions when she stands in the harbor. She is 305 feet tall, her mouth is three feet wide, her nose four-and-a-half feet long and her fingers eight feet long. An estimated four million people visit her each year.

Lady Liberty no doubt has a hard time finding a new pair of shoes. She wears a size 879.

“There’s a beautiful view of New York Harbor if you climb to the top of my crown,” she said. “You have to climb 354 steps to get there.”

The seven spikes in her crown are representative of the Seven Seas and the continents from which immigrants have come to the U.S. over many years.

Lady Liberty is the dominant feature on Liberty Island. Nearby is Ellis Island, a famous stopping point for immigrants from all over the world. Ellis Island today is home to the largest immigration museum in the world.

Libby explained to the students why she is green. It’s the patina formed by many years of oxidation. Her exterior is copper the thickness of two pennies stacked together.

Lady Liberty was built in Paris, France in the 1880s. She was designed by famed French sculptor Frederic Auguste Bartholdi with its metal framework being built by Alexander Gustave Eiffel, who also built a pretty famous tower that’s still in Paris. Lady Liberty is a gift to the U.S. from the people of France, our country’s best ally in the War for Independence. Her parts were packed into 214 large crates and shipped to America, where she was put together like a giant jigsaw puzzle. The statue was dedicated on Oct. 28, 1886.

There’s a broken shackle at Lady Liberty’s feet symbolizing the 1865 abolition of slavery in the U.S.

Lady Liberty’s torch-bearing arm was displayed at the Centennial Exposition in Philadelphia in 1876 and in Madison Square Park in Manhattan from 1876 to 1882.

A site was acquired on what was then known as Bedloe’s Island and work began on Lady Liberty’s pedestal.

The work was slow and fundraising difficult until Joseph Pulitzer, publisher of the New York World and founder of the Pulitzer Prize, started a fundraising campaign to finish the project. More than 120,000 people contributed, with most donations being less than one dollar. It got the job done, though, and New York celebrated with its first-ever ticker tape parade. The dedication ceremony was presided over by President Grover Cleveland.