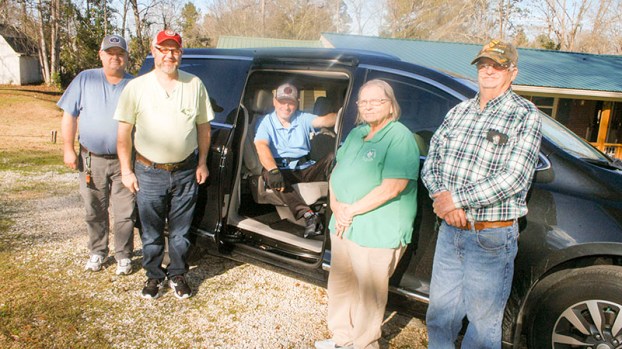 James Myers, center, is getting pretty good at getting in and out of the new van his family has gotten. A few weeks ago it was a struggle with two family members having to help him do it. With him now being able to do much of the work himself, only one person needs to assist him. At left are James’ brothers, Jeffery and Tony; at right are his parents, Hermon and Cheryl Myers.

VALLEY  — Four months ago it was feared that James Myers might never walk again.

He’d been having back pains since June and on the final Friday in August he couldn’t move his legs at all. He was at home at the time with his parents, Hermon and Cheryl Myers, and brothers Jeffery and Tony. He told his family that he needed to go to the bathroom but couldn’t move his legs. When his mom rubbed the legs and he told her he couldn’t feel it they knew something was seriously wrong.

“We knew then it was more than a pulled muscle in his back,” said Cheryl Myers.

James was given an MRI at the hospital in Columbus, and it revealed an abcess on his spine. Surgery removed the abcess two rods with eight screws were put into James’ back.

The source of the problem was a staph infection.

Last September it looked like he might be confined to a wheelchair for the rest of his life. He still has a long way to go to meeting his goal of participating in the Hike/Bike/Run fundraiser for Valley Haven School.

He was very happy to report on Friday that he had taken 200 steps on his own while working with RehabWorls physical therapists Monica Clothaiux and John Cooper at EAMC-Lanier Hospital.

They had him secured with a gate belt and had a wheelchair behind him in case he lost his balance. He came through it like a champion.

James goes to RehabWorks every Monday, Wednesday and Friday, and credits Monica and John for getting around much better than he did just a few weeks ago.

“The doctors are amazed at how far James has come since September,” Cheryl said.

Most encouraging is James’ attitude. He wants to go out and do things and manages for himself as much as he can.

The Miracle for the Myers weekend raised enough money to purchase a 2020 Chrysler Pacifica van for the family. It’s ideal for those who have a family member with a disability. Monica and John taught family members how to get James in and out of the van without injuring him.

Now it’s a matter for him to rebuild strength in his legs and to learn to walk again.

Cheryl credits Joe McElvy for being a big help to the family.

“We will be forever grateful to this community for the way they have helped us,” Cheryl said, “and it’s not just from those who are living here in the Valley now. It’s also from those who have moved away. We have gotten donations from Pittsburgh, North Carolina, South Carolina, from all over. It’s been unbelievable, and we are so grateful. People from our neighborhood and our church have been so supportive.”

Cheryl said she’s pleased that James can get out of the house now and go places.

The donations have been a major blessing for the family. The new van has lots of amenities for a disabled person, one of them being a vent they can control from the back seat.

“He needs to get more air than we do and can control that himself,” Cheryl said.

For now, the Myers just have to wait and see what happens in the future.

“Right now, we don’t know what the future holds,” Cheryl said. “The doctors have told us they will have to do more testing to determine if there’s any more staph in his body. It’s too soon to tell.

Cheryl, Hermon and their sons were planning on taking a trip to Gatlinburg, Tennessee when James’ ordeal began this past summer. That’s been put on hold, but they are looking at doing it in 2020.

“We would like to take that trip in late March,” Cheryl said. “It will be a challenge, but we want James to know he can still do fun things. We are all looking forward to it.”

Twin Cedars Youth and Family Services has a goal to educate at least 10 percent of the adult population in... read more