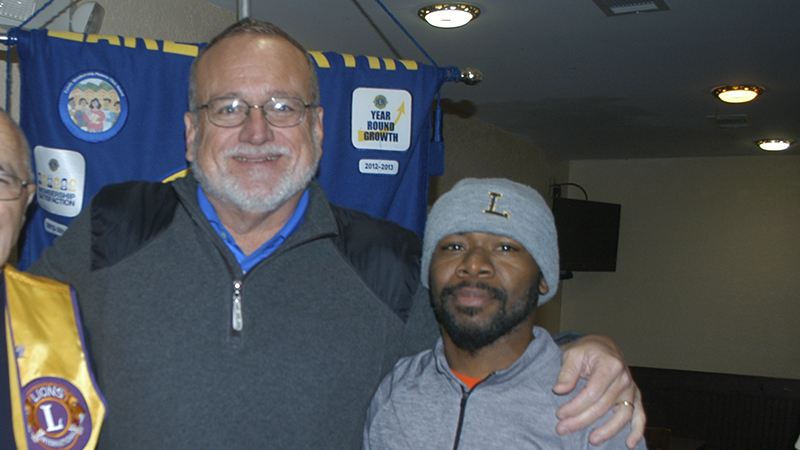 VALLEY — On Monday evening, a retired educator who remains an assistant football coach at Lanett High talked about LHS being his favorite stop in close to 35 years in the classroom. Chip Seagle told members of the Valley Lions Club that he’s been many places in his career as a teacher and coach but Lanett is the one place that stole his heart away.

Seagle retired prior to the 2019-20 school year but remained on head coach Clifford Story’s staff partly because the 2019 Panthers had a good chance to win another state championship in football but mostly because he loved working with the LHS program under Story. It’s also a case of having the black and gold in his blood.

“People who have had a connection to Lanett High love the school,” he said. “Our superintendent, Jennifer Boyd, and our high school principal, Bryant Lumpkin, are Lanett High graduates. A number of our teachers attended Lanett High and still love it.”

When Seagle speaks of Lanett, he’s reminded of a quote attributed to the late Medgar Evers, a Civil Rights icon who was gunned down in Mississippi in the 1960s. Evers faced lots of threats before he was gunned down, and once when his wife begged him to move the family away he told her, somewhat jokingly, that “I don’t know if I will be going to heaven or hell when I leave this earth but I do known that I will be leaving from Jackson, Mississippi.”

Despite its fault during that time period, he loved his home state and did not want to move away.

Seagle said that he’s one of a number of teachers and administrators who feel that way about Lanett High.

Seagle didn’t attend Lanett High. He grew up in the Columbus-Phenix City area and attended Jordan High School. One of his high school teachers, the former Vivianne Littlefield, had graduated from Lanett High and talked a lot about it being a special place to her. He thought about that when an opportunity came up to join Coach Story’s staff at Lanett High in 2009. Seagle, Charlie Williams Jr. and Earnest Webb joined the staff that year. There was some rough going early on. Their first team went 6-4 to make the playoffs but the second season was trying to say the least. They won their final game over Loachaopka to avoid an 0-10 year.

“This may be hard for you to believe, but that year laid the seeds for what was to come later,” Seagle said.

“People are always asking me why we don’t run the football,” Seagle said. “We were a running team back in 2013. We ran for 4,000 yards and had a running back (Marlon Bridges Jr.) to run for more than 2,000 yards, but then those Story boys came along who could throw it all over the yard. We changed our offense to accommodate what they could do.”

A third Story brother, Caden, may be the Lanett High quarterback for the next two years.

The middle brother, Kristian, or “Ken Ken” as everyone in Lanett knows him, is a high school All American. He was recently named the state’s Mr. Football after leading LHS to a 14-0 season. This coming fall he will be a freshman at the University of Alabama. Seagle said that Ken Ken is the best player he has coached in his 34-year career.

“There is no doubt about it, from his tenth grade on he has been the best player on the field. A lot of college coaches looked at him as a quarterback and how soon he could fit into their system. Nick Saban saw him as an athlete who could play multiple positions. He didn’t watch just film of him in games, he also watched video of him working out. He liked what he saw and knew he could have a player in Ken Ken who could play at a championship level.”