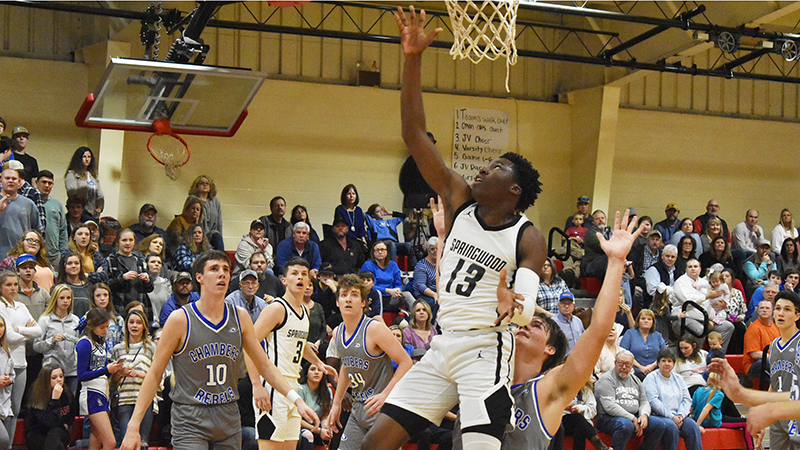 Springwood forward Francis Okeyia gets to the rim in the Wildcat’s win against Chambers Academy. He finished with 16 points in the win.-- Photo by Cody Estremera

The 2018-19 season was one to forget for the Springwood boys basketball team, as they finished 0-20.

Now with three games left in the season, the Wildcats are in the middle of their area, fighting for a playoff appearance. There have been a couple of reasons for the quick turnaround. The first is head coach Lisa Sampson, as she has worked to improve both the boys’ and girls’ programs.

The other is the addition of senior Francis Okeyia.

Growing up, Okeyia bounced between sports, trying to figure out which one he would stick with. When he was 11-years-old, he discovered basketball.

He instantly fell in love with the sport. He continued to play in the U.K., but since soccer and cricket are the two fan-favorite sports over there, he felt the best move for him would be to play basketball in the United States.

Okeyia started the moving process by talking with his head coach in the U.K., who had made the same move he was about to embark on. His coach got him in contact with different schools. He had a couple of schools to choose from but decided on starting at St. Mary’s school, which is in southwest Oregon.

“That was fun,” Okeyia said. “It was harder up there because I was a lot smaller and a lot less confident.”

Even though it took him some time to adjust, the senior dominated for the Crusaders, finishing the year with a double-digit scoring average.

At the end of the year, Okeyia had the opportunity to join another school. One factor that went into his decision to leave Oregon and go to the southeast was coverage. With his time on the west coast, he was able to gain exposure to the coaches out there, so he wanted to allow other coaches to see him in a different area of the country.

He decided to go 2,600 miles southeast to Springwood, where he has made an immediate impact.

The senior is one of the Wildcats’ leading scorers, as he scores more than 20 points a game. Outside the numbers on the stat sheet, Okeyia has made an impact through his leadership.

“I think it makes me want to step up even more [having nine other seniors on the team],” Okeyia said. “I know that if I don’t step up here, there is a full line of people that want to step up for me. It motivates me to be more of a leader.”

That leadership was on display in Springwood’s upset win against Chambers Academy. Okeyia got into foul trouble early and had to sit for most of the first half. Instead of allowing that to impact his performance, he was talking with guys on the bench, calling out plays, and when he entered the game in the second half, he made an immediate impact, finishing with nine points in the second half.

Adjusting to life in America

Living in a new country is never easy, especially as a teenager trying to figure out their life past high school. That was a challenge Okeyia has faced since leaving the U.K.

“It’s a big culture shock. It’s completely different than where I’m from in the U.K. Even Oregon is more farming country. There are trees, hills and valleys,” Okeyia said. “In the U.K., you don’t see that.”

The first adjustment starts with the weather.

The U.K. has a completely different weather pattern than most places in the U.S. Where Okeyia lived, he mainly dealt with constant rain. Alabama does not rain as much and is much hotter than the U.K., especially during the summers.

Another adjustment is just being away from family. One reason he chose to come to the south was his family living in Dallas. Since Dallas is a relatively short trip from Chambers County, he was able to fly to Texas and spend time with his relatives.

“As well as basketball, it was about being at home too,” Okeyia said.

The final adjustment is getting used to the people in a new area and making friends. This is something Okeyia didn’t have to worry about.

When he arrived at Springwood, he was reunited with one of his best friends from the U.K., who he has known for 15 years, in Tyrese Ferguson.

“It was crazy,” Okeyia said. “I didn’t believe it at first.”

Ferguson is one of Springwood’s starting guards, and he is in his first year abroad.

The pair are roommates at the Springwood dorm, and when they aren’t doing schoolwork or practice, they are constantly competing.

“It’s almost to me that they are brothers,” Sampson said. “They’re very close and always together.