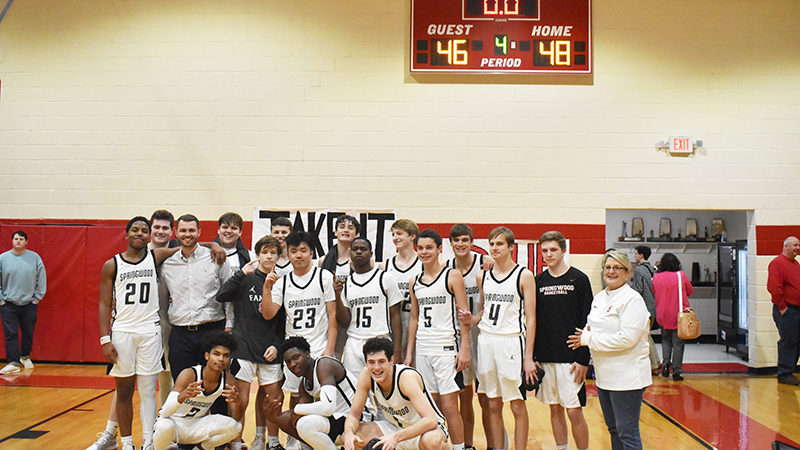 The Springwood boys basketball team poses in front of the scoreboard after upsetting No. 5 Chambers Academy, splitting the season series.--Photo by Cody Estremera

With 1.1 seconds left in the game, No. 5 Chambers Academy point guard Payton Allen went to the free-throw line to shoot three shots. He sunk all two of the three, but it didn’t matter as the Springwood boys basketball team upset rival Chambers Academy 48-46, sending the student section to the floor in celebration.

“We went 0-20 last year,” senior guard Coleman Hull said. “We kept that as a chip on our shoulder. Nobody on this team has forgotten that. Nobody forgot that they ran the score up on us like every team did last year. For us, every single game is a revenge game.”

The game was a fight for the entire 32 minutes. The Rebels led the game after the first quarter by five, as they were able to hit three shots from behind the arc, including one from Allen, which was behind the college 3-point line.

Springwood senior forward Francis Okeyia, who scored seven of the team’s nine first quarter points, got into foul trouble early in the second quarter, meaning he sat out the rest of the first half.

This allowed Hull to do some damage. The senior knocked down a pair of 3-point shots to spark the offense, as he scored eight of the team’s 14 points in the second quarter.

The two teams went into the half tied at 23.

In the third, the combination of Hull and Okeyia combined for 10 of the 15 Wildcat points. Hull was able to hit a three in the quarter, while Okeyia fought through several  Rebel players on his two layups.

With two minutes left in the game, the Wildcats took 44-40 lead. They took advantage of a technical foul by Chambers head coach Jason Allen to put them ahead for the rest of the game.

“Payton is one of the best players in the state, and I knew we had to do something defensively to disrupt him,” Sampson said. “He even made some great shots with two kids on him. That’s a testament to him.”

“We have to step up,” Jason Allen said. “Someone else has to score. We have to pick it up.”

Hull and Okeyia combined for 33 of the team’s 48 points, scoring 17 and 16 respectively.

The Wildcats travel to Lee-Scott for their Friday matchup.