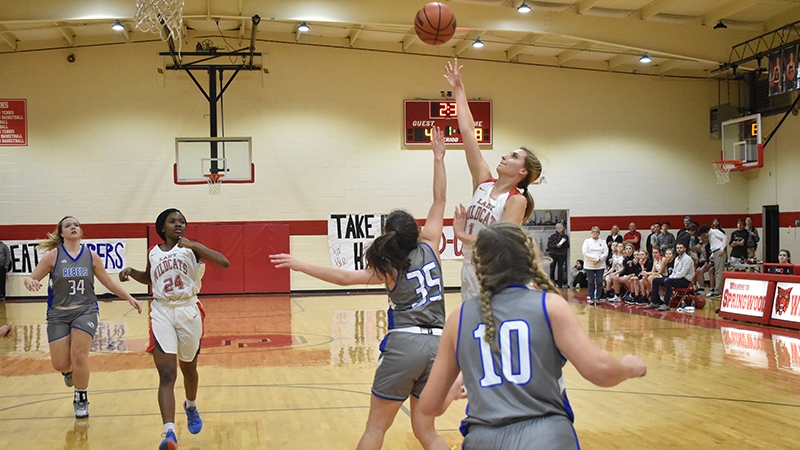 After coming off a tough eight-point loss on Tuesday, the Springwood girls basketball team had to face another tough team as they welcomed their rival Chambers Academy to their gym. In the first matchup, the Wildcats put the Rebels away early in the second half. That was not the case in Thursdays’  47-36 win.

“We knew it was going to be tough, rivalry games are always tight,” Springwood head coach Lisa Sampson said. “We talked about adding energy and our defense. That’s what stuck out to me. They defended and they got some easy buckets because of their defense.”

The Wildcats started the game strong defensively. They were able to force turnovers with the full-court press and create easy scoring opportunities.

They were able to build a double-digit lead by the end of the eight-minute quarter.

“Our press dictated the pace we were going to play,” Sampson said. “We got some steals.”

However, the Rebels fought back in the second quarter. Hines decided to implement his own full-court press that forced bad passes and deflections. They were able to hold Springwood scoreless for the first six minutes of the quarter. The other reason Chambers fought back was forward Britten Stephens.

The junior missed the Rebels’ last game with an ankle injury and she did not start the game because of it.

She scored seven of her nine points in the second quarter, which allowed a couple of three-point opportunities for the guards on the wings.

In the third quarter, both team’s presses worked well, as the two teams combined for 19 points but struggled to score for several stretches.

In the fourth, the combination of a smaller bench and the Wildcats’ press, the Rebels started to fade.

They were able to score only six points in the quarter, while the press started to break.

“We got a little fatigued in the end,” Hines said. “We had to keep pressing because that’s what was working.”

The Wildcats were able to open the game open, as they scored 16 points in the final eight minutes.

Senior McKayla Barber, who had mainly been a facilitator for most of the game, started to fire shots.  She finished with eight of the 16 points in the fourth quarter.

“She’s our scorer,” Sampson said. “Tori’s [Patillo] our scorer. They have got to look to make opportunities for themselves. Sometimes they are a little bit too unselfish, and they can’t be.”