Springwood’s Patillo making a difference as a sixth grader 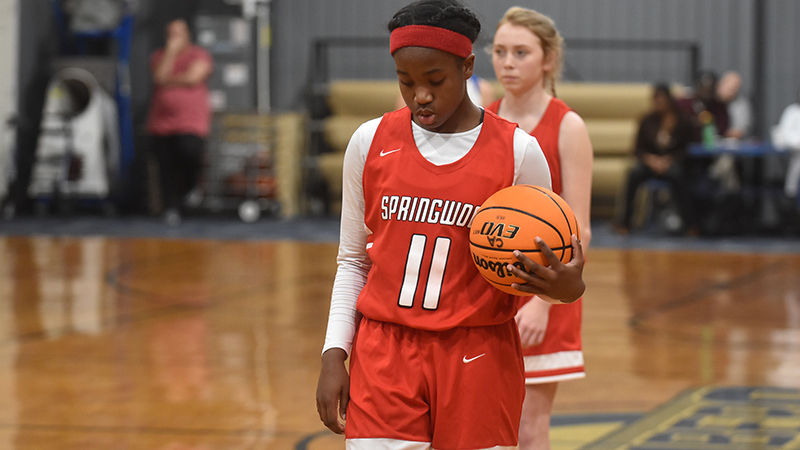 There are very few underclassmen around the country that start and make an immediate impact on a ranked varsity squad, but there are even fewer middle schoolers that play high school basketball.

“It’s amazing,” senior forward Andie Martin said. “She played last year as a fifth grader, and I was like ‘oh, I hope people talk about her.’ She came out, and she could really play. I’m really proud of her.”

The 11-year-old has started for Springwood all year as a sixth-grader. She is one of the Wildcats’ most dynamic players, as she is able to drive and score on the inside while handling the ball as one of the two point guards.

Patillo has always played above her age level, playing with girls a year or two older than her in travel basketball, so the jump to high school competition wasn’t necessarily crazy for her. With her experience of playing against older girls, Patillo knew what to expect, so she was able to focus on just playing basketball.

“I just like playing,” Patillo said. “I know that if I get down on myself, they’ll [the coaches and other players] will help me.”

The two seniors are players that help Patillo the most on the court, making sure she doesn’t get discouraged.

“She’s really hard on herself which most of the players hold us up to like a certain standard, so it’s good,” senior point guard McKayla Barber said. “You want to make sure to stay positive during the game because you always have another shot, another possession. We just encourage her and say ‘if you are unsatisfied with your last one, make it up with the next one.’”

When she took the job in early August, Springwood head coach Lisa Sampson had heard about a sixth grader that had plenty of talent and upside. Sampson held tryouts and realized the talent the 11-year-old had.

“Having played and coached the game for so long, you can tell a kid that has a lot of ability,” Sampson said. “She impressed us from the start. She made a move last night [in Springwood’s win against Coosa Valley] that I could not believe. Anyone on a varsity level would have been able to make that move, and she’s a sixth grader.”

She then talked to the Patillo family to see what they wanted to do — let her play varsity or let her be a star on JV.

The Wildcats travel to Evangel on Thursday. The first game is set for 5 p.m. EST.