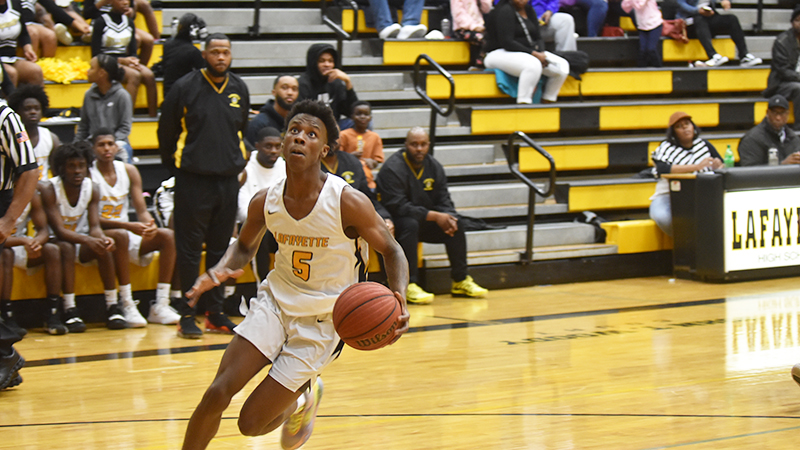 The 2019-20 basketball regular season has just two weeks left before the start of area play. A couple of teams from Chambers County have put themselves in a good position for the start of the area tournament.

Here is a rundown of every varsity basketball team in Chambers County.

The Bobcats have struggled this season, as they currently sit just 1-14 this season. The lone win was a two-point victory against B.B. Comer on Dec. 18.

With their eight-point loss on Tuesday, the Bobcats fell to 1-4 in area play with one more game to try and avoid the No. 4 seed in the area tournament.

The Rebels started later than most AISA schools since they reached the football state championship game and most of their players are on the football roster. Just as they have done the past few years, the Rebels have dominated their schedule this year, as they sit 13-3 overall and 4-0 in their area.

Since their loss at Springwood this past Thursday, the Rebels are 2-0 and have allowed just 56 points. In that same two-game span, Rebels leading scorer Payton Allen has scored 49 points.

LaFayette has dominated its schedule as it sits 22-0 with four games left on the schedule. In their first 10 games, the Bulldogs won each game by more than 10 points. Overall 19 of the wins were by double digits.

On Martin Luther King Jr. Day, the Bulldogs traveled to Georgia to play Tucker. The Tigers are 21-3 this season and the No. 1 team in Class AAAAAA. The Bulldogs came back to defeat the Tigers 69-66.

LaFayette is the No. 1 team in 2A and has already clinched the regular-season area championship, as it stands 5-0 in Region 4.

The Panthers opened the season 4-7 before starting area play. Since their first area game on Jan. 7, the Panthers have taken off, winning eight of their last nine games. Four of those wins were against area opponents.

When it won on Tuesday, Lanett won the regular-season area championship, meaning they will host the area tournament in early February.

After finishing the 2018-19 season 0-20, the Wildcats have taken a couple of steps forward. They are 7-10 so far this season, which includes a win against Chambers Academy at home.

The Wildcats have struggled to finish games in the second half of the season, as they have just a couple wins in 2020.

With six games left in the regular season, the Rams are 7-10 and 2-2 in their area. The problem for the Rams this season has been road games, as they have dropped road trips this season.

Valley has a pair of area games left on its schedule, one of which is on the road. Right now it is the third seed in 5A Region 4.

After starting the year on a five-game losing streak, the Bobcats have won six of their last 11 games.

The Bobcats are a very young team, but they have been able to win the games that matter, as they are undefeated in area play.

On Tuesday, they hosted Randolph County and were able to blow out the Tigers 30-9.

Beulah has a chance to clinch the regular-season area championship on Thursday when it hosts Dadeville.

The Rebels are 11-5 this year with a 4-0 record in their area. All five of the Rebels’ losses this season were by a ranked team.

Defense is what first-year head coach Jeff Hines preaches to his team constantly throughout practice. This is evident as the Rebels have allowed less than 20 points in five games this season.

Since their loss at Springwood, the Rebels have dominated their two opponents. Junior forward Britten Stephens was a key participant in both wins, as she scored 45 points in the two games. In the 19-point win against Restoration, Stephens finished with 30 points while collecting 19 rebounds.

After starting their season on a five-game losing streak, the Bulldogs are hitting their stride just when they needed to, as they have won six of their last 11 games.

“It’s been a challenge. It’s been hard work,” head coach Fred Bridges said after the Woodland win. “We came in and from day one the girls have put in hard work. It’s been fun to see the girls transition.”

It took some time for the Bulldogs to adjust to Bridges’s system, but now they have a chance to host the area tournament, as they are tied with Ranburne for the top seed.

The Bulldogs lost by three at home the first matchup against Ranburne but won by 18 on the road in the rematch.

Since the Panthers started the season late because of football, they faced a gauntlet of opponents early in the season, playing six games in eight days at one stretch in time.

Once the schedule calmed down, head coach Charlie Williams was able to get his team into the gym for practice, and they were able to work on different areas of the game.

Since that time, Lanett has won five of its last six games, including three area games. It is currently the two-seed in the area tournament, as its only area loss is on the road at Loachapoka.

The Wildcats are one of the more experienced girls teams in Chambers County, as they line up two seniors and a junior in their starting lineup.

The Wildcats started the year off hot, winning 11 of their first 12 games of the year. They were ranked as the No. 6 AISA school in the state because of that start. Since that point, the Wildcats have struggled to find consistency as they have won just one out of their last six games.

The one win was against Chambers Academy. Three of the five losses were against area opponents.

Springwood has two games left before the start of the postseason. Their final regular-season game is on Tuesday when they host Lee-Scott.

The Rams started the season 5-2 with their head coach out for Achilles surgery. Since he returned in January, the Rams have lost just two games and are 4-0 in their area. Overall, they are 10-4 on the season.

Valley has played three Chambers County teams and has defeated two, with the lone loss coming on the road at Lanett.

The Rams have a chance to win the regular-season area championship on Tuesday when they host Brewbaker Tech.