Tinsley returns to Valley, takes merry go round back home 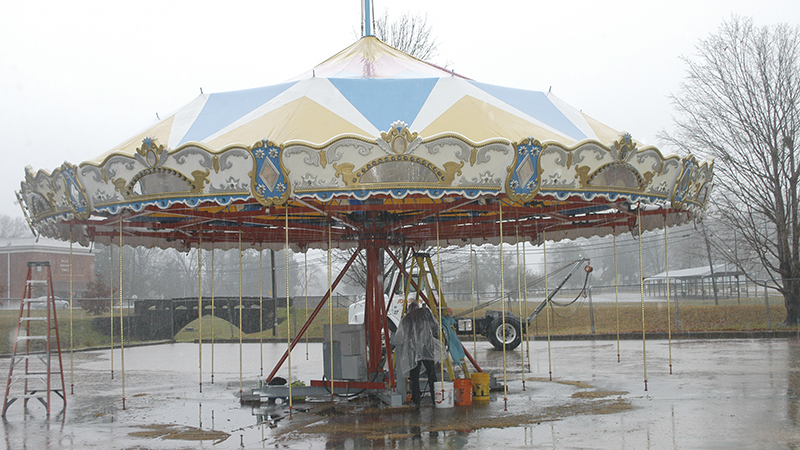 The Valley Merry Go Round is shown partly taken apart on Friday in the rain. The carousel was taken back to High Hill, Missouri by Tinsley’s Amusements. Rich Tinsley, the owner, brings it to Valley every year and then makes the trip back to help break it down. --Wayne Clark

VALLEY — Rich Tinsley’s life has come full circle with small horses. When he was nine years old, he helped his dad in providing rides for children on Shetland ponies. He’s 83 now and still giving horseback rides on small horses. This time the rides are aboard his merry-go-round.

“My dad worked for the government in the years after World War II,” he told The Valley Times-News on Friday while directing the taking down of his prized merry-go-round on the rain soaked Langdale tennis courts. “To supplement the family income, we’d have pony rides. My dad was around horses all his life and loved to see kids having fun riding his Shetland ponies. We’d take them to fairs and other public events, and I would help sell tickets.”

Being hooked at an early age, Tinsley has been in the amusement business all his life. He now has between 35 and 40 pieces of equipment, his favorite one being the carousel he’s been bringing to Valley for the past 15 years.

“I have another one we take to Indianapolis every year during the Christmas season. It’s okay but is not as good as the one we bring to Valley. We’ll have to go get it this week,” he said.

Tinsley’s Amusements is based in High Hill, Missouri, not far from St. Louis. He stays plenty busy in the spring and summer months.

“We play the eastern half of Missouri and the central and northern portions of Illinois,” he said. “We take our rides to Des Moines, Iowa, to Tennessee and Mississippi. Our biggest event each year is the Minnesota State Fair. We started going there in 1996. It’s the biggest, and I think, best state fair anywhere, and we are happy to be part of it.”

The 13-hour ride to Valley every November and the 13-hour ride back to Missouri is one of the longest trips he takes every year. It’s also a trip he enjoys making.

“I wouldn’t do it if I didn’t,” he said. “I saw on Facebook that Valley had its three millionth rider this year. That’s great, and we’re glad we had some part in that. I’m not that much into Facebook, but I did see that.”

Tinsley didn’t make the trip down this year to set up the carousel.

“I’m kind of old and clumsy now,” he joked. “And, I’ve been hurt in some falls I’ve had the last few years.”

In 2018, he broke a bone in his back in a fall. He’s fully recovered from that. This past November he had another spill and cracked some ribs.

“That’s why I didn’t come to set it up,” he said. “I’m feeling a lot better now. I drove down most of the way yesterday, and I’ll drive back part of the way today. I just wish this rain would stop.”

Tinsley said it takes a work crew of eight or nine men to set up a carousel and to take it down.

“You need that if you are going to do it the right way, and that’s the way I always do it,” he said. “I have a really good crew helping me. They are doing their jobs in the rain today. It’s a really good crew, and I’m glad to have them. I like it that they’re not addicted to anything like alcohol or drugs. I’m not a party pooper, but I do have a brain in my head and staying away from that stuff is reality to me. I just hate it that my guys have to work in the rain today, and that we’ll have to drive back in it. It was rough getting through Birmingham. There must have been four or five wrecks there. People need to slow down and drive within the speed limit, especially when it’s raining.”

“I was in bad shape three or four weeks ago after I had that fall, but I feel good now,” he said. “I have just a high school education. God forbid that I had gone on to college. I’d be a really spoiled brat right now.”

Tinsley said the amusement business isn’t what it once was. There’s tighter government regulations than there used to be. He blames this for forcing many people out of the business.

“I just wish we could take the corrupt politicians out of government,” he said, making a case that too many regulations hurts the small businessman.

He lists the Minnesota State Fair and the trip to Valley as highlights of the year for him.

“That fair in Minnesota is run the way a fair should be run,” he said. “I will never forget our startup in St. Paul, and the experiences we have had there. There’s no corruption in the way things are done. There’s a lot of good people in Valley, people like Laurie Blount. I’ve enjoyed working with her over the years. Valley has something really special with this merry-go-round tradition. It goes all the way back to 1956. I’ve always loved making children happy, and we can do that with our amusement rides.”

Tinsley still has some goals he’d like to accomplish.