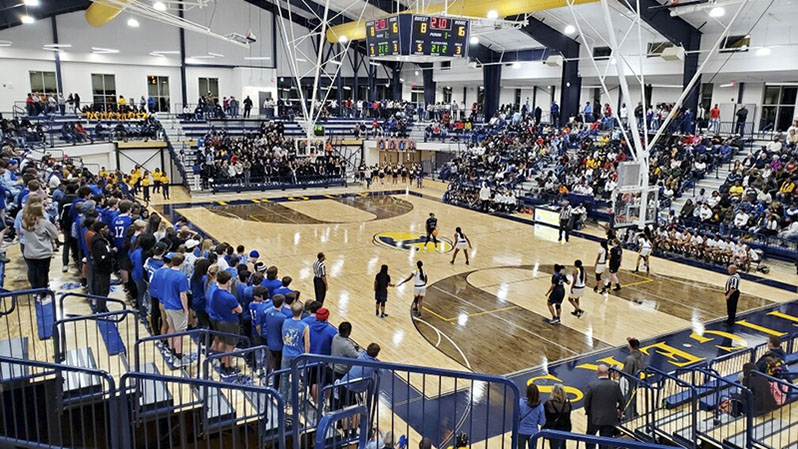 A journey that began more than four years has come to a close, at least for one local school.

In 2015, the idea of building new gymnasiums and indoor practice facilities at Troup High and LaGrange High was proposed.

In 2017, the project was given the green light by the Troup County Board of Education with funds coming from E-SPLOST. Soon after, the work began.

While LaGrange High’s facilities won’t be completed until later this year, everything is open for business at Troup High.

On Thursday afternoon, a dedication ceremony was held for Troup High’s new facility, with many of those who helped make it a reality there to share in the celebration.

After some speakers shared their thoughts, tours were provided of the 2,000-seat gym, the state-of-the-art indoor practice facility, the offices, the training room, the weight room, the new practice area for the wrestlers and the cheerleaders, and everything else in the building.

“We began this project back in 2015, believe it or not,” said John Radcliffe, TCSS assistant superintendent of Maintenance and Operations. “We were able to go to the community and get a SPLOST vote, and I want to thank you so much for that.”

Radcliffe detailed all of the time and effort that went into bring the facility to life, including more than 300,000 man hours of construction work.

“It has been truly a labor of love to bring this building to fruition,” he said.

Niki Watts, Troup High’s principal and a graduate of the school, called it “an amazing day for me as a life-long Tiger.”

Brian Shumate, who took over as Troup County school superintendent almost a year ago, recalls a conversation he had with head football coach Tanner Glisson about how much the students were enjoying the indoor facility right after it opened.

“Probably the most poignant statement was by coach Glisson, and he said I can’t get these kids out of here. I can’t get them to go home,” Shumate said. “When kids are at school, they’re under adult supervision, they’re playing and participating in good physical activity. What better way to spend their high-school careers and their formative years, and then to be under supervision of positive people, and be able to do great things.”

Kirk Hancock, the chairman of the Troup County Board of Education, said the board could not be prouder of the facility, and the one being built across town.

“As Dr. Shumate said, it’s a place that all of our students will call home,” he said.

Watts, a 2005 graduate of Troup, said the building is building more confidence to the student body.

“The 1,300-plus students of Troup High School are walking with their heads held a little higher because they know this is right here in our back yard, and they know this belongs to them, and it belongs to us,” she said. “We appreciate so  much the citizens of Troup County, and their vote for the E-SPLOST, and also our board and everyone that supported this initiative and gave our students this opportunity.”

Tanner Glisson, Troup’s head football since 2015, strongly pushed for the indoor facility, and he helped go out in the community and sell the idea.

On Thursday afternoon, as he stood on the turf of the indoor facility, Glisson made sure to point that it’s not just for football, although his team will no doubt benefit greatly from its presence.

“Soccer’s been in here. Baseball’s been in here,” Glisson said. “Of course, it’s got the lines painted for football and it’s got everything, but we want this to be for all sports. We’re tremendously excited about it. This opens up so many possibilities. I’m just thankful for the people that voted for it.”