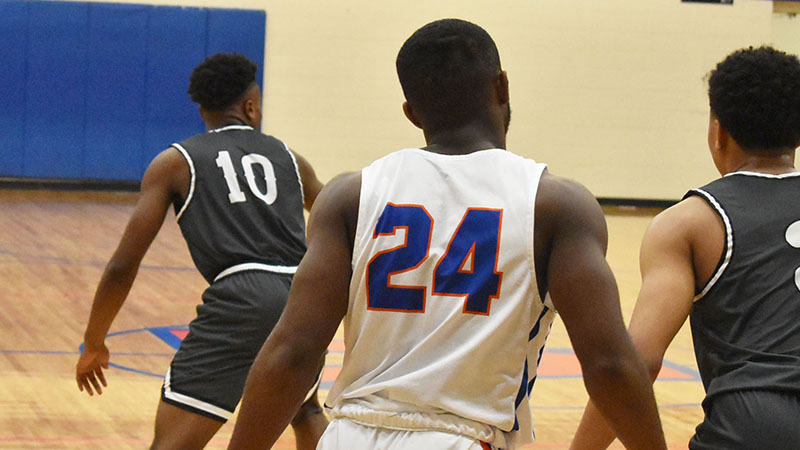 Valley junior guard K.D. Hutchinson donned No. 24 instead of No.2 in honor of Kobe Bryant.--Photo by Cody Estremera

On Sunday, the world was captivated by the news of the helicopter crash that killed nine people including Laker legend Kobe Bryant and his daughter Gigi.

In the short time since the crash, teams have found a way to honor the legend. Across the NBA, teams took eight-second and 24-second violations in honor of the two numbers he wore in his 20 years in the NBA. The Detroit Pistons wore custom jerseys in their pregame warmups that had both numbers on it.

On Tuesday, the Valley Rams boys’ basketball team found a way to honor the fallen legend 2,164 miles from the arena Bryant spent his entire 20-year career.

When the Rams lineup up for the tip, junior K.D. Hutchinson was sporting a different number. Instead of the normal No. 2 stitched on his chest and back, he wore the No. 24, in honor of Bryant.

“I used to grow up watching him,” Hutchinson said. “When you’re at school, you shoot a piece of paper in the trash can, you say ‘Kobe.’ I liked the way he played. He had that Mamba mentality.”

The Mamba mentality is the phrase that described Kobe’s attitude while working on his craft. It meant that a player is locked in and focused on getting better.

Hutchinson decided that he was going to make the switch before the Rams game on Tuesday. He asked head coach Marshon Harper if it would be okay if he made the switch.

“Kids, you never know what’s on their mind, so I didn’t fight it,” Harper said.

A couple of times in the game, Hutchinson used some of Bryant’s signature moves, mainly the step-back fadeaway.

“Like he always used to say, you have to work at everything you do, so I hit some,” Hutchinson said. “It’s just like Kobe used to do. If I miss one, I’m going to make the next one.”

Hutchinson will don No.  2 for the rest of the season, as the No. 24 will be worn by another Ram later in the week.