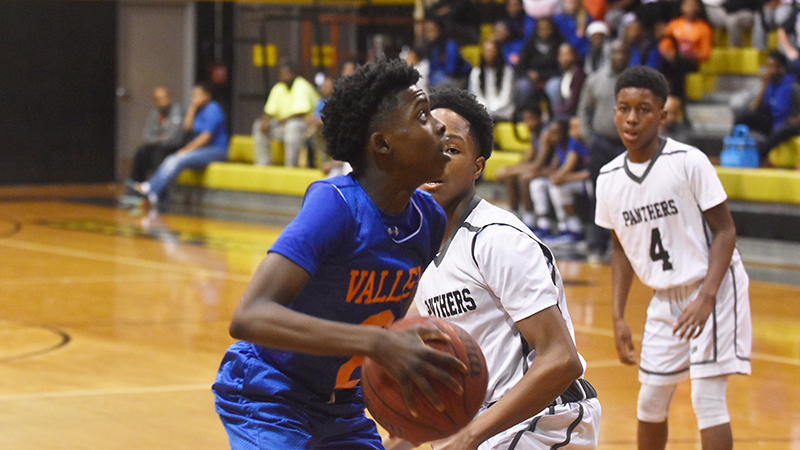 Valley guard Jay Harper drives toward the rim for a layup attempt in the Rams blowout win on Monday. --Photo by Cody Estremera

“We’re coming off the holidays,” Hall said. “We looked slow in the first half, so we tried to change the tempo by going full-court man.”

The change in defense did more than slow down the Panthers in the second half — it ignited the Rams’ offense.

Valley outscored Lanett 16-6 in the third quarter, and most of the 16 points were scored off of turnovers.

The Panthers struggled to get anything going offensively for most of the game. They were held under 10 points in all four quarters. They were able to get to the foul line seven times but made only one.

When the two teams matched up in December, Cam’Ron Dooley provided most of the Rams’ offense. On Monday it was Brandon Thomas.

Thomas finished with a game-high 13 points, shooting 50% from the floor. Six of the 13 points were scored in the third quarter.

“When you have that much talent on the team, it picks up the slack when one of your guys is in a slump,” Hall said. “Collectively as a group we played well. Even the guys off the bench had a chance to make some plays and build their confidence up.”

Valley will play Sanford on the road on Wednesday, while Lanett will travel to rival LaFayette for its first matchup against the Bulldogs.