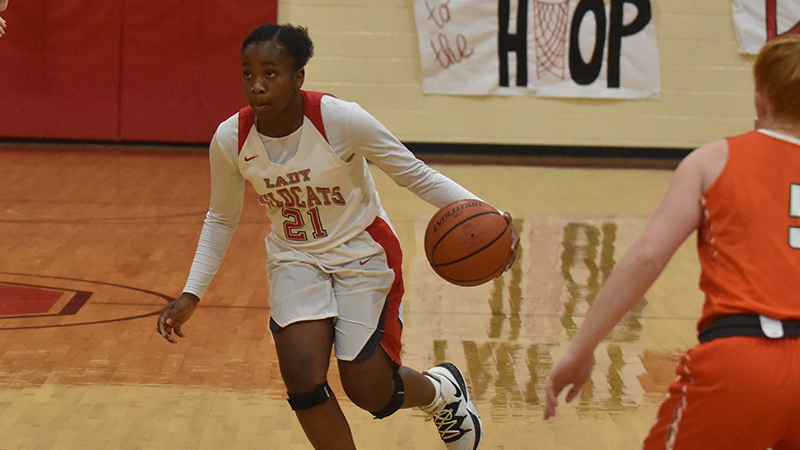 Springwood sixth-grader Tori Patillo drives to the basket in the Wildcats loss on Tuesday.

After coming off a blowout loss at area opponent Lee-Scott this past Friday, the Springwood girls basketball team had a chance for redemption, as they hosted area opponent Glenwood.

“We just have to compete harder from start to finish,” Springwood head coach Lisa Sampson said. “Right now, we’re doing it in spurts, and that’s not good enough when you’re playing a team as good as Glenwood.”

Springwood started off extremely cold, as they scored just four points in the opening quarter. They converted just one field goal in the quarter while shooting 2-for-4 from the free-throw line. This slow start built a seven-point deficit.

The offense slowly started to pick up in the second quarter, as the Wildcats were able to score 10 points in the quarter, but defensively, the Wildcats started to struggle, as the lead grew to 12 by halftime.

The Gators doubled the Wildcats’ score in the third quarter, basically sealing the game.

The three bigs that Glenwood used caused big problems for Springwood. All three girls were much taller than anyone on the Springwood roster.

“We’re not moving when the ball is in the air,” Sampson said. “That’s what it’s about, team rebounding when you have two bigs you’re going against.”

Forward Tesia Garrett-Hammett played big minutes for the Wildcats in the loss. The freshman was able to play inside and was a big part of the Wildcats’ rebounding attack in the second half.

“I’m very proud of Tesia,” Sampson said. “Just the way she battled on the boards and the way she was quick. That’s what we ask of them.”

She finished with four points off the bench.

The Wildcats travel to Eufaula on Thursday to play Lakeside.