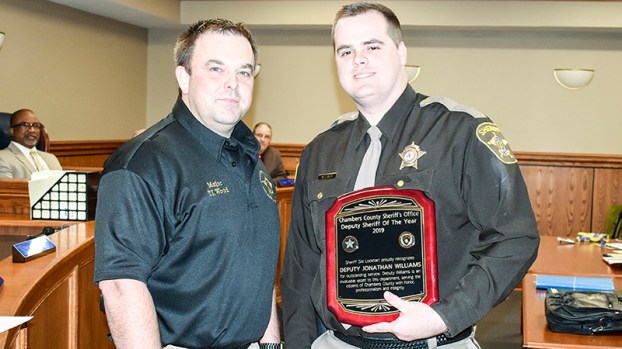 Chambers County Sheriff’s Office deputy Johnathon Williams, right, was honored by Major T.J. Wood Monday night at the Chambers County Board of Commissioners meeting with the sheriff’s office’s Deputy of the Year award. 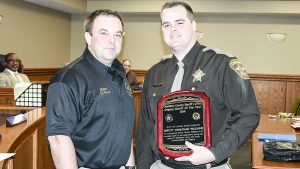 Chambers County Sheriff’s Office deputy Johnathon Williams, right, was honored by Major T.J. Wood Monday night at the Chambers County Board of Commissioners meeting with the sheriff’s office’s Deputy of the Year award.

Wood said Williams started in the sheriff’s reserve program and has now been with the department for about four years.

“In those four years, he has done a phenomenal job,” Wood said. “He is one of the most proactive, go-getters you could ask for. If we had a department full of Johnathon Williams, we would have a tremendous department that would be unstoppable.”

Additionally, Sgt. Keegan Daniel was honored as Deputy of the Quarter by Wood. 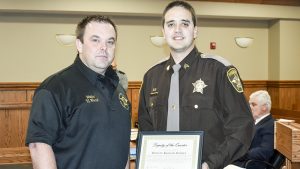 Chambers County Sheriff’s Office Sgt. Keegan Daniel, right, stands with Major T.J. Wood, left, after being honored with the department’s Deputy of the Quarter Award Monday night at the Chambers County Board of Commissioners meeting.

Wood highlighted the fact that Daniel stopped a burglary in process in November by noticing a suspicious vehicle parked on a county road. After monitoring the location, Wood said Daniel saw a group of individuals appear from the woods. After an investigation, it was learned the group had just burglarized a cabin.

In December, Wood said Daniel stopped a vehicle on Interstate 85 and after searching the vehicle, found several forged checks. Wood said it was later determined that the individuals stopped had been forging thousands of dollars of bad checks throughout the state.

“That’s just taking something small and looking a bit further into it,” Wood said.

Also, on Monday night, the county granted a liquor license to Sticks Bar, doing business as Dirty South LLC. The bar is located at 4064 County Road 237 in Roanoke.

Deputy Sheriff Richard Carter said the manager of Dirty South LLC is Jason Welch with a listed address in Opelika. Carter said Welch’s wife used to operate another bar called Southern Saloon but that has since closed and the Welchs are now opening this location.

Carter said he had no reason to deny the application.

Lastly, the county approved several bids to improve county roads. The price of the bids was not disclosed Monday because County Engineer Josh Harvill said they were all based on the volume of work done by the contractor.

LANETT — In its first meeting of the new year on Monday, the Lanett City Council awarded a contract to... read more