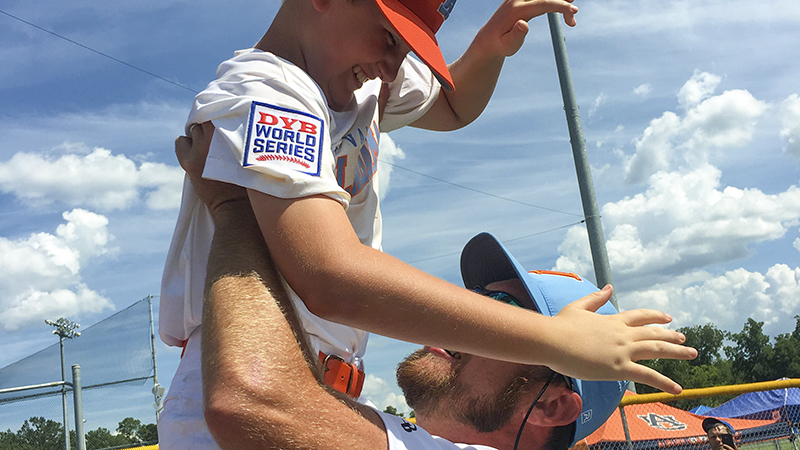 Austin Barber is lifted up by his father.

With a 13-1 win against Loachapoka, Lanett cinched its first baseball playoff birth since 2002.

CHAMBERS SOPHOMORE ALLEN NAMED NAAPS 2A PLAYER OF THE YEAR

Chambers Academy guard Payton Allen was named to the National Athletic Association of Private Schools Class 2A Player of the Year. He finished the year averaging 23.9 points and nine rebounds a game.

With a win against Morgan Academy, the Springwood Wildcats reached the AISA semifinals.

CARTER ANNOUNCES 2019 WILL BE HIS LAST

After coaching for 48 seasons, Lanett head coach Richard Carter announced that the 2019-20 season would be his last.

Katie Brooks Miles signed to cheer at Point University making her the first competitive cheerleader from Valley to sign collegiately.

After finishing second in the high jump in 2018, Zameron Boozer won the state with a jump of 6-foot-6.

Feliah Greer won two gold medals, one in the javelin and the other in shot put. Jacquez Trammell finished first in the triple jump. JaQuavian Boston-Gaines finished with a gold in the long jump.

The Valley 9 and 10-year-old baseball all-star team defeated Ashford 10-4 to clinch a trip to the Dixie Youth World Series.

With three and a half hours of sleep, 11-year old Allie Paschal made the United States Specialty Association All-American team.

The Valley 9 and 10-year old all-stars defeated Virginia 12-2 to win the World Series.