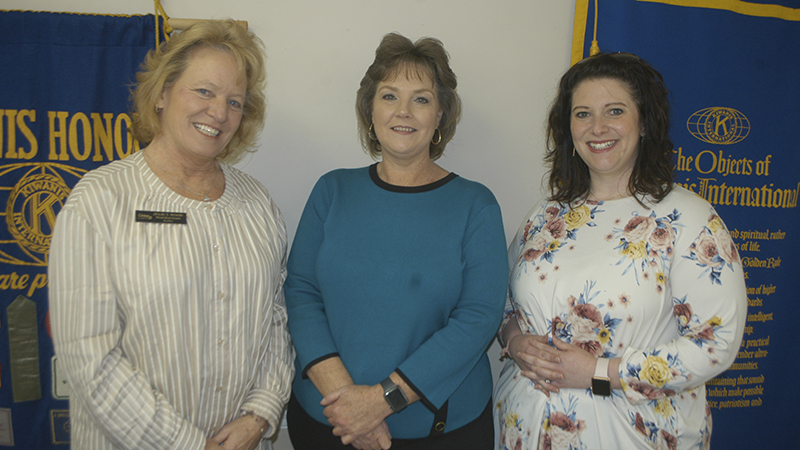 Chambers County Revenue Commissioner Beth Abney (at center) was the guest speaker at Wednesday’s noon hour meeting of the Kiwanis Club of Valley. She was appointed to the position by Governor Kay Ivey in February 2019 following the retirement of Wendy Williams. She has worked in the office for 22 years. At left is Julie Wood, the program chair, and at right, Bethany Roughton, club vice president. --Wayne Clark

VALLEY — For the second time in a little more than a year, Beth Abney is seeking the position of Chambers County revenue commissioner.

In the first go-round it was up to Gov. Kay Ivey. That was last February. Wendy Williams opted for early retirement, leaving the position vacant. Even though Abney was second-in-command in the department, the position of revenue commissioner wasn’t just given to her. She had to convince state officials working for the governor that she was the right person for the job.

“They interviewed me for the position,” she told members of the Kiwanis Club of Valley during Wednesday’s noon hour meeting. “I had to prove to them that I could run the office.”

Letters were written to the governor from local officials urging her to appoint Abney, and she did.

One year later, Abney is seeking that same vote of confidence, this time it’s not from the governor but from Chambers County voters.

That choice will be made next Tuesday in the Republican primary. Since there’s no Democrat opposition, the candidate who wins on Tuesday will run that office for the next six years.

A native of East Point, Georgia, Abney has lived in Alabama for more than 30 years, most of that in Chambers County. She is a licensed appraiser and has been in the revenue commissioner’s office for 22 years.

“We don’t just collect taxes,” she said. “We pick up everything recorded in the probate office, review it and find out if there has been a name change or if the property has been split.”

Every individual parcel of property in Chambers County has to be accounted for and there’s 24,500 of them.

The taxes that are collected are remitted to the state and local governments, local school boards, the local hospital and active rescue squads. The office has a final settlement in August and makes a report to the state.

“We have to account for all monies,” Abney said.

In most years the revenue commissioner’s office is off a few cents here or there. Abney’s first review from the state was a bit different. She said she had it right on the nose. There were zero errors; every penny was accounted for.

Abney gives much credit to her staff for this remarkable achievement. She credits this to considerable cross training that has been going on in the office for some time.

“We couldn’t function without it,” she said, pointing to the example of an assessment clerk who has had two babies over a four-year period. “While she was out on maternity leave, we filled in for her. Things went on seamlessly because of our cross training. I had trained members of the staff before I became revenue commissioner. (Chief mapper and appraiser) John Hall trains everyone in his department.”

There’s a total of 11 people in the revenue commissioner’s office. This includes two real property appraisers, a chief mapper and appraiser (Hall, who will be retiring next January), a mapping clerk, a map clerk trainee, two collection clerks (one part-time) and a compliance office collection clerk.

Collectively, the office has more than 194 years of experience.

“We are audited every two years,” she said.

“I have been there 22 years, and we have been given a clean audit every time.”

A member of the club asked Abney how she felt about having a drop box at the courthouse where people could make their payments.

She said that Williams had attempted this in 1998, but that the box had never been taken out of the container it came in.

First of all, the county commission would have to approve of doing this and there would have to be agreement between county offices on how payments would be dispersed.

Some people pay in cash and aren’t clear about what the money is for. Some payments go to the revenue commissioner, some to the probate judge, some to the clerk of court and so on.

“It’s not good to have a box people can put payments in for several different offices,” she said.

A club member asked Abney if property owners should be contacted by mail if an appraiser is going to go on their land.

She said she has been sending letters in the event the land is posted with no trespassing signs, has a locked gate, dogs in the yard, etc. The letters asks for a day and time the appraiser can meet a property owner on the land. Sending out letters in every case would be expensive.

“My office recently sent out court orders on people who hadn’t paid their taxes,” she said.

Abney said that nine times out of ten an appraiser doesn’t have to get out of the car to see everything that needs to be seen. If they should have to go onto someone’s property, they will be wearing badges and have credentials with them.

“The first thing they will do is knock on your door,” she said.