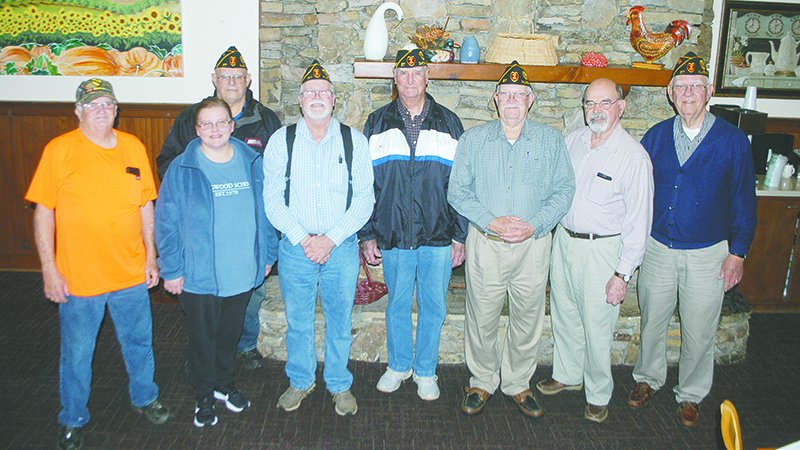 VALLEY — In their monthly meeting on Tuesday, members of American Legion Post 67 were pleased with the news that the Department of Veterans Affairs will have an office in Lanett. They also set a date to collect donations from the public to send care packages to U.S. troops with local connections.

On Feb. 25, a Veterans Service Office will begin operations at the Chambers County Courthouse Lanett Annex. The office will be open on Tuesdays and Thursdays from 8 a.m. to 4 p.m. and will be staffed by a service officer who will be an advocate for local veterans and their families. Post Commander Lanny Bledsoe said that such an office is very much needed in the local area. Veterans won’t have to travel out of town to seek help with their benefits.

“The way I understand it, someone will be there to talk to them on a first-come, first-served basis,” Bledsoe said. “It will be someone who can point them in the right direction, so they can get the help they need.”

Post Adjutant Sammy Newton told fellow members of the post that each member is eligible for $1,000 in health insurance once they sign up to be a member.

“If you give me your name and your birthdate, I can fill out the needed forms for you,” he said.

Saturday, March 7 is the tentative date when members of the post will be in Veterans Park in Valley accepting donations for their care package initiative.

They will be there from 10 a.m. until 3 p.m. EST accepting donations. In the event of light rain, they will be underneath the nearby Farmer’s Market Pavilion. If the weather forecast for that day is not good, the event will be postponed to a following Saturday.

It costs $21 to mail a box to a soldier who is stationed overseas. Monetary donations can cover those costs. The boxes can be packed with items such as baby wipes, beef jerky, crackers, sunflower seeds, snacks, and personal care items such as toothpaste, tooth brushes, soap, shampoo, shaving cream and roll on deodorant. Aerosol cans and liquids that have been opened cannot be sent due to being transported by plane.

“We sent two of them to John Anglin of River View,” Bledsoe said. “He’s with the 82nd Airborne Division, and he’s somewhere in the Middle East. I talked with his grandmother recently. She told me that they had talked to him and that he was thrilled to have gotten those boxes and was able to share the items with his fellow soldiers.”

The other box went to a young man from the local area who is serving in Africa. He is with a unit that has been sent to secure an airport in Kenya that recently sustained an attack. It’s a sensitive situation, and his family back home is worried about him.

“When I was in the Marines back in the 1950s, I really enjoyed getting boxes from home,” Bledsoe said. “My dad would put the latest issues of The Valley Times in there so I could catch up on all the local news. My mother would put in some fudge she’d made. The sergeants went through it first, but they’d leave some for me. What meant the most to me was that I knew it was from back home and that my mother had made it for me.”

Bledsoe said that what Legion members need now are names and addresses of local soldiers who are away from home, either in the U.S. or overseas. They also need donations to fill the boxes.

“We will pack the boxes and mail them from the post office,” he said.

Donated items that can’t be shipped, such as aerosol cans, will be donated to the Bill Nichols Veterans Home in Alexander City. Members of the Legion Auxiliary make regular trips to take gift items and to visit with the aging veterans.

Bledsoe said that lots of people have contacted him asking what they can do.

“After the first article came out in the paper last month, we had enough donations to send three boxes,” he said. “We would like to keep this going. It’s important for our young men and women who are serving in the military to know that people back home care about them.”