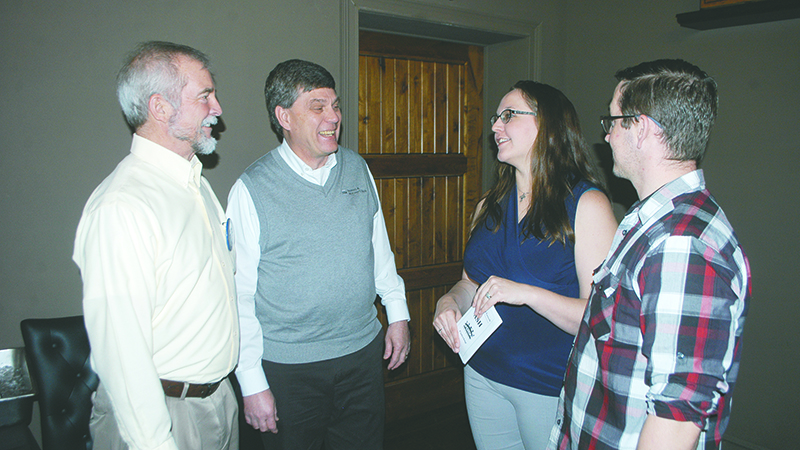 American Smoke House (ASH) caterers Alex and Sam Johnson (at right) show one of their “Let’s Do Lunch” menus to West Point Rotary Club members Marshall Sapp and Rob Huling (at left). The club had its weekly meeting on Thursday inside the ASH banquet room, which very much has the feel of a hunting lodge with mounted heads of deer, elk and antelope on the wall. The Johnsons cater for ASH, Coach’s and in season, Railroad’s. --Wayne Clark

WEST POINT — There was a change of venue for Thursday’s noon hour meeting of the West Point Rotary Club. Instead of the usual River Room at the Lanett Hampton Inn & Suites, the club met in the banquet room of the American Smoke House, or ASH, in downtown West Point. Catering and Events Manager Alex Johnson talked to them about the new restaurant and its catering.

Johnson told members of the club that she and her husband, Sam, do catering not just for ASH but also for Coach’s (located across West 3rd Avenue) and in season, for the Railroad’s ice cream shop.

“Coach’s started in 2016 as a sports bar and grill with a unique stadium seating style set up and sports-themed food,” Johnson said. “It has a fun, laid-back environment. Monday is trivia night, on Tuesdays we serve pancakes as breakfast for dinner and [we have] 50-cent beer and dollar wings on Saturday. Coach’s has 36 employees, all but eight of them have been there since the start.”

ASH opened in 2018 with the idea of having a local combo bar and steakhouse. Its most popular gathering place is the banquet room, which has the feel of a hunting lodge with mounted heads of trophy deer, elk, ducks and pronghorn antelope on the wall. The deer are from Troup County with the elk and antelope being from Colorado.

The banquet room can comfortably hold up to 50 people for a rental event.

“We have gotten as many as 80 people in here at one time,” Johnson said. “Both ASH and Coach’s cater, and we are not limited to what’s on the menu. If you have an idea, tell us, and we can make it happen. We have a lot of wedding receptions booked, and we’re proud of that. We’d love to have a wedding here.”

Both ASH and Coach’s support community events such as school fundraisers, and they sponsor local youth sports teams.

“We also helped out on Thanksgiving Day,” Johnson said. “We are proud of our community, and we support it.”

Both restaurants contributed to Thursday’s meal. The pulled pork, potato salad and rolls were prepared at ASH while the chicken fingers and green beans came from Coach’s. Everyone there agreed it was absolutely delicious.

The two restaurants have had something of a boomerang effect. A major factor in their opening in downtown West Point was that local people wouldn’t have to travel out of town to have a good meal. Previously, people from the local area had to go to LaGrange, Pine Mountain, or Opelika-Auburn for such an experience. Now, Coach’s and ASH are not only attracting local people, but they’re also bringing in people from LaGrange, Pine Mountain, Hamilton and Opelika-Auburn.

“We get compliments on our ribeye steaks and our vegetables,” Johnson said.