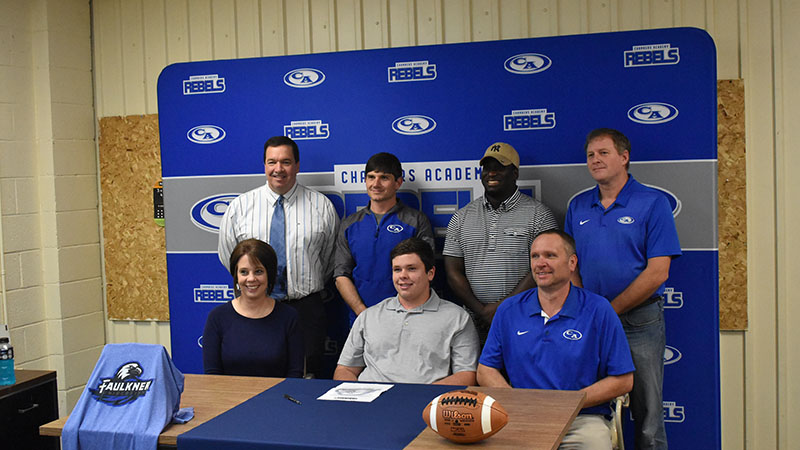 Throughout the recruiting process, Chambers Academy offensive lineman Gabe Brooks was set on going to Huntingdon College to continue his football career. Not long before he was going to sign, he went hunting by himself. On that hunting trip, he prayed about his decision.

When he arrived back at his house, he was in a Faulkner shirt.

“I prayed and prayed about it, and the Lord wanted me [to go to Faulkner],” Brooks said.

On Wednesday, he made it official when he signed his letter of intent in front of his family and members of the 2020 senior class.

“I always dreamed of playing football, so it’s a big accomplishment for me,” Brooks said.

The two aspects that drew Brooks to Faulkner was that it was a private Christian school and the Eagles’ coaching staff.

“I kind of like that idea,” Brooks said. “The coaches really took their time to get to know me and everything, so they got a coaching staff that really cares.”

Getting your name out into the right eyes isn’t always easy, especially for an athlete that goes to a small private school. Brooks had three ways he got his name out there. The first was by his play on the field.

Brooks finishes his high school career with four state championship appearances and one ring. In his four years as a Rebel, Chambers Academy finished 48-4. He started three of those years moving between left tackle and center.

“He got better every single year,” Chambers head coach Jason Allen said. “There’s no secret where our success lied, and it was up front with our big guys. To play in three straight state championships and win one, I think that’s a testament to the type of player he was…. He really had a great career with for us at Chambers.”

Secondly, he had a recruiting coach named Nate Griffin helping to get his name to different coaches. Griffin used his connections to try and get the ball rolling for the senior lineman.

Finally, he did a lot of work on his own, sending coaches his tapes and attending camps.

“I’ve done a lot of the work too,” Brooks said. “For the past few months, I’ve stayed on Twitter and apps like that, sending coaches my stuff. I went to five or six camps over the summer trying to get noticed. I think we did a really good job getting my name out there.”

He plans to study criminal justice while at Faulkner.