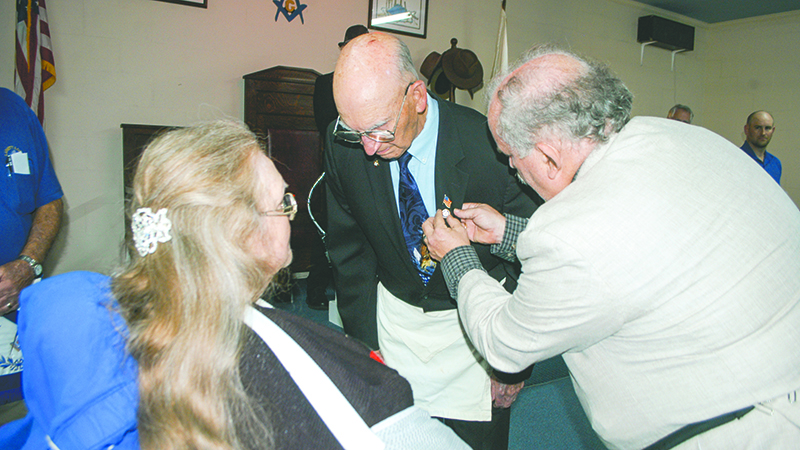 LANETT — Lon Brown has served his country, community and fellow man in exemplary ways. He served his country in both the Korean and Vietnam wars, having been with the U.S. Navy from 1952-79. He was honorably discharged from the Navy as a master chief petty officer with an E-9 rating. He then worked for George H. Lanier Memorial Hospital for 25 years, serving as the business office manager and retiring as the chief information officer.

As a crowning achievement of service to his fellow man, he recently received the Grand Lodge Award of Gold from the Alabama Masonic Lodge. This rare award signifies being a member in good standing for 50 years.

“I’m humbled by this,” he said in a ceremony at Lodge No. 656 in Lanett. “It’s a high and distinguished honor, and I am really touched by it. I didn’t know I would live to see this, but I am glad I did. I am so glad my wife, Phyllis, is here with me to see it.”

Brown credits Phyllis’ dad, the late Harold Smith, on having been a major figure in the Lanett lodge and for having had a positive influence on him.

“He helped build this lodge, and he missed being in it for 50 years by just three months,” he said. “I appreciate all of you being here. So many good men in this lodge had a big impact on my life. (The late) Verna Payne taught me Masonry. He told me I would be a good member one day. I hope he was right about that.”

District Lecturer John J. Hall III of the Alabama Grand Lodge presented Brown the Award of Gold pin plus two other pins from the Grand Master and the Grand Lodge. He also received a certificate marking the occasion.

Leon and Phyllis have been married 61 years, and they have three children. He will be 86 on March 14.

Brown has dual membership in Lodge No. 656 in Lanett and in the Solomon Lodge No. 74 in LaFayette. He’s also been active in the Order of the Eastern Star and has served as a worthy patron.

“He has held a number of positions in our lodge,” said Worshipful Master Barry Smith. “He’s been both a worshipful master and secretary. Mr. Leon earned this recognition, and we are so pleased for him to be honored in this ceremony and for Phyllis to be here with him.”

The Masonic lodge is the basic organizational unit of Freemasonry. Meetings are held on a regular basis to conduct business, schedule charitable events, elect new officers and so on. The Lanett lodge each year awards scholarships to deserving graduates of local high schools and has a widow’s basket program during the Christmas season. Its fundraisers include seeing and fall car shows in the parking lot across from the Lanett Mill site and a bass tournament on West Point Lake.