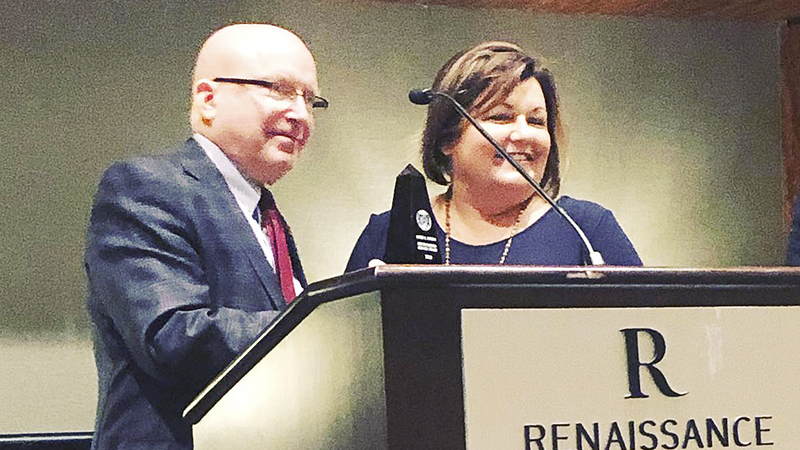 Earlier this week, Chambers County Development Authority Executive Director Valerie Gray was awarded the 2019 winner of the David R. Echols Distinguished Service Award, which is awarded to the most outstanding economic developer in the state.

“When I found out that I had actually been nominated and then later won the award, I felt extremely humbled. In my line of work, economic developers are always behind the scenes people,” Gray said. “It was a great feeling to know that the people that I work with, from the state and the utility providers, had the confidence in me to nominate me for this prodigious award.”

Gray has worked at the CCDA since 1998, and in her 22 years of service, Chambers County has developed.

In the late 1990s, Chambers County was dealing with a period of transition. The textile mills were closing, which meant the county was losing jobs. In 2009, the unemployment rate was nearly 20%, which was one of the highest counties in the state.

Gray and the CCDA went to work to solve that problem.

“That’s probably the greatest gratification I get out of it [working as an economic developer], just knowing that people that live in this community have opportunities and access to good-paying jobs,” Gray said. “There’s always room for improvement and there’s always room for us to bring in manufactures that pay higher wages. Our goal is to increase the wealth and earning wages for the people that live in Chambers County.”

The CCDA started the process by figuring out how to bring jobs into the county since textiles were not the future. After the studies, the CCDA figured out that forestry and warehouse distribution were the future for the community. Automobile companies decided Alabama would be a good state to produce cars, which brought suppliers like Ajin into the county.

“Just seeing the overall development and our unemployment rate dropping dramatically, that is an awesome feeling,” Gray said.

To make sure the county doesn’t rely on one industry for jobs, the CCDA put a diversification plan into action in 2010. The plan’s goals to divide the jobs between warehouse supply, manufacturing a diversity of products and forestry.  Gray plans to retire from public service within the next 35 months. Even though retirement is in sight, Gray plans to continue to work just as hard as she did 22 years ago.

“Over the next three years, I plan to work just as hard as I did on day one, never give up and make sure that we are successful in recruiting industry,” Gray said.