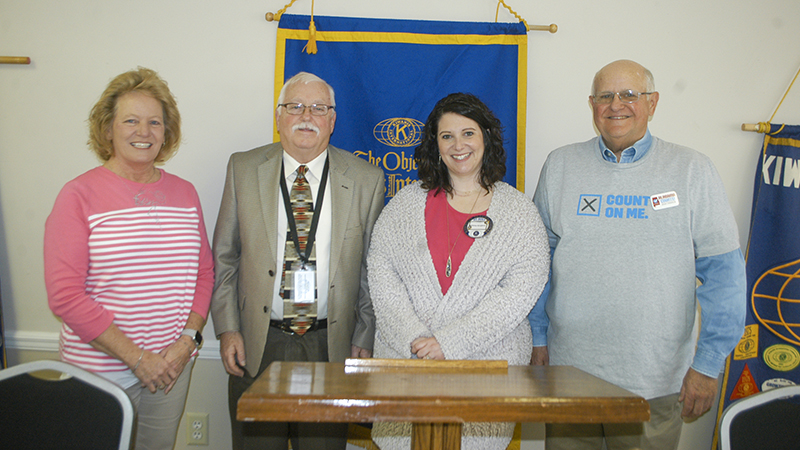 Commissioner Sam Bradford and U.S. Census recruiter John Eldridge were guest speakers at Wednesday’s noon hour meeting of the Kiwanis Club of Valley. Bradford talked about the importance of everyone being counted in Alabama this year and Eldridge on the availability of good-paying Census jobs. From left, are Julie Wood, program chair; Eldridge; Club Vice-President Bethany Roughton and Bradford, who’s wearing a “Count On Me” t-shirt given to him by Gov. Kay Ivey.-- Wayne Clark

VALLEY — Alabama is not growing as fast as many states in the U.S., and there’s growing concern Alabama could take a hit with the 2020 Census. A low count could cost the state one, possibly two, seats in Congress in 2021.

Chambers County Commissioner Sam Bradford and John Eldridge, a recruiting assistant for the U.S. Bureau of the Census, talked about this at Wednesday’s noon hour meeting of the Kiwanis Club of Valley.

Since Alabama is in a vulnerable spot, it’s more important than ever to have the best Census count its ever had. Every person living in this state on April 1 needs to be counted for our state to get its fair share in terms of representation in Congress, federal grants and getting new businesses to come to the state. Census data determines how public funds are spent for schools, hospitals and roads.

“We are on the bubble in losing a representative, and we could lose two,” Bradford said. “It all comes down to getting our fair share of money and services. If we have a bad census count, we could have two fewer people at the table trying to get that share. $675 billion is at stake.”

Bradford said Valerie Gray is also stressing the importance of this year’s Census.

“Valerie Gray, our director of the Chambers County Development Authority, has said that having the best count we can have this year is the most important undertaking she’s ever been a part of. That’s quite a statement,” Bradford said. “David Eastridge (who’s been a county commissioner for many years) said that this is the most important issue facing us since he’s been in office.”

People can help by making sure they respond to the 2020 Census and for everyone in their household to be counted. People will start receiving information in the mail by mid-March. It will tell them what to do to make sure they are counted. It’s a very simple procedure and can be done online.

Bradford and Commissioner Debra Riley have been working on getting the word out about the census and how important it is, especially this year.

“We have had four public meetings on this,” Bradford said. “We met once at the Chamber of Commerce and once at the Cotton Duck. We want everyone to understand that every person counted will mean $1,600 for Chambers County.”

Conversely, there’s a loss of $1,600 for every person who should have been counted but wasn’t.

“One of the largest groups not counted is children under five years of age,” Bradford said. “Make sure everyone in your household is counted.”

The information gathered on individual families is strictly confidential.

Census workers do not enter your home should they call on you, and any information they receive is private.

A big challenge for Chambers County, said Bradford, will be to accurately count the local area’s growing Latino population.

“There is a large number of them here,” Bradford said, “and we need as many of them counted as possible.”

Every Latino resident not counted loses $1,600 for Chambers County.

Bradford said that many good things are happening for Chambers County right now and that the county doesn’t need that hindered by a weak census count.

Eldridge has a more immediate problem. As a census recruiter, he needs census workers. Plenty of part-time jobs are available right now, especially in neighboring Lee County. These jobs pay $15 an hour and include mileage.

“There are plenty of jobs to be had,” he said, “We need 1,900 people in Lee County and have 700 right now. We have hired over 260 people in Chambers County. We’re in better shape here than in most counties. I’ve been recruiting high school students and college students for these jobs.”

Eldridge said that local mayors have been very helpful in opening doors for him.

“They have helped a lot,” he said.

Anyone interested in working part-time for the U.S. Census can apply online at 2020census.gov/jobs.