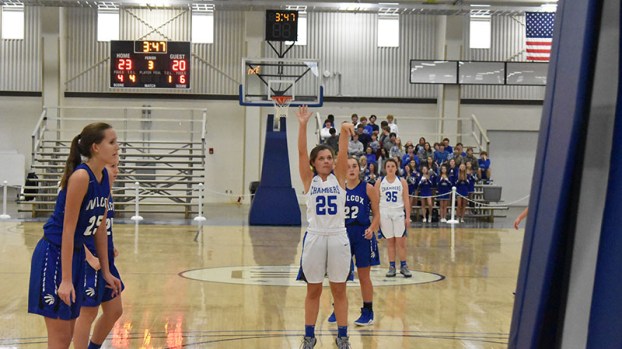 In the Chambers Academy girls’ basketball 41-26 win against Wilcox in the quarter-finals of the AISA State Basketball tournament, the rebels only led by two at the half.

The Rebels had started off fast, building a seven-point lead by the end of the first quarter. They were able to spread out their attack, as six of the eight players finished with at least one point in the quarter.

In the second quarter, the Wildcats were able to start a comeback. They scored only five points in the first but quickly started to make shots in the second, cutting their deficit to just one with 2:23 left in the opening half.

“That’s what we talked about at halftime, the last four minutes of the first half,” Chambers head coach Jeff Hines said. “We just went mentally blank. We didn’t have any energy or intensity. We were not executing.”

Hines’ halftime speech worked, especially on defense. The Rebels allowed just eight points the remaining 16 minutes of play. They were able to get into their press, which forced a good amount of turnovers.

“We’ve talked about the first five minutes of the second half and there’s been a lot of games where we have not performed like we’re supposed to,” Hines said. “Our girls locked in the second half. We knew our pressure in the backcourt was going to give them problems, and I think it wore them down in the second half.“

With the Rebels forcing turnovers in the backcourt, they were able to score quickly, building on their lead.

The Rebels are back in action on Thursday when they play the winner of Sparta and Evangel. The tip is scheduled for noon CT at the Montgomery Sports Complex.

“I am really proud of this team,” Hines said.