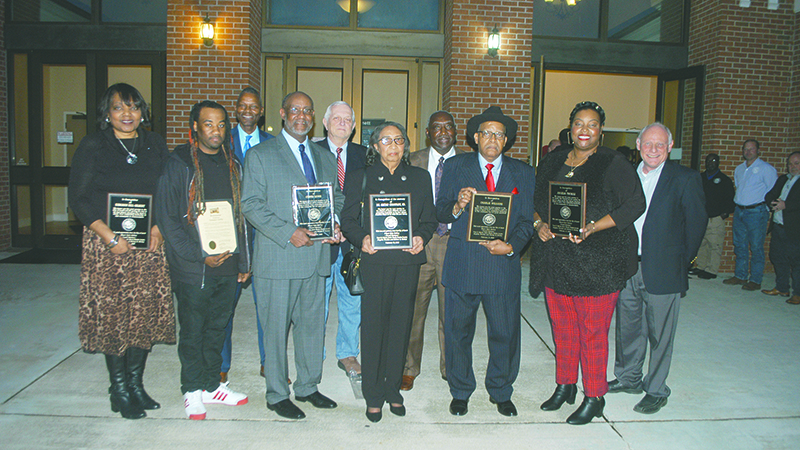 A Lanett native, McCoy lived in the Atlanta are for a number of years before moving back home in 1998.

“I joined the Lanett Athletic Club when I moved back,” he said. “Charlie Williams was the president at that time. He restored in me a lot of pride about Lanett. He coached me up and helped me take over as president of the athletic club when he retired. I ran it for seven years, and I had some of the best times of my life back then. Charlie Williams has always been a good friend to me. He was always the kind of person you could pick up the phone and talk to. We didn’t always agree on everything, but I’ve always respected his views.”

Williams was on the city council from 1988-92 and on the city school board from 1992-98. He’s been a member of the Chambers County Commission since 2012 and has served as the commission chairman.

Curtis Lewis was on the city council in the 1990s.

“He had an equally important impact on the city,” McCoy said. “He put in his time sitting up there in one of those (council chamber) chairs and listened to the complaints. He’s been with our recreation department for 10-12 years now. We have been very fortunate to have had him here since WestPoint Stevens left. The kids love and respect him. He has been a positive influence on their lives. He knew early on that some great success was coming to Lanett High athletics because they were coming through his recreation program.”

In the last decade, Lanett High has won two state championships in track, three in boys basketball and two in football. This year’s basketball team was playing to go the 1A state semifinals on Tuesday night.

The mayor said that Oscar Crawley had been a good friend to him and that it had hurt him deeply when he passed away in 2015.

“I’d come off the council in 2008 and he talked me into running four years later,” McCoy said. “If it wasn’t for him, I wouldn’t be here as mayor. Oscar Crawley did so much for so many people. Having his family here tonight means so much to me. He was a major pillar in the community for a long time. He helped so many people get jobs when he was with WestPoint Pepperell.”

McCoy presented a plaque honoring the late mayor to his widow, Clemestine Crawley, a retired educator who taught for 26 years at W.F. Burns Middle School in Valley.

In surprise announcements not listed on the agenda, the mayor also presented plaques to City Clerk Deborah Gilbert and Council Member Angelia Thomas.

“There are individuals with us tonight who have shaped the future of our city,” he said. “They have sacrificed and given of themselves.”

He then asked a surprised Angelia Thomas to come to the front and accept a plaque. “She’s the first African-American woman to serve on the Lanett City Council,” he said. “We appreciate you and everything you do. You have done a lot for this city since you have been on this council, and you are part of our city’s future.”

He then asked City Clerk Deborah Gilbert to step forward and accept a plaque.

“I know you weren’t expecting this, but I’m glad I was able to talk you out of going to a conference in Birmingham today. I have never worked with anyone who is as conscientious and dedicated to her job as Deborah is. It is an honor and a privilege to have her working for the city. I’m extremely grateful for this,” she said. “I wasn’t expecting it.”

Council Member Tony Malone thanked everyone for coming to the meeting.

“I want to thank each one of the honorees for what they have meant to our city,” he said.

“This is a very good night,” said Council Member Charles Looser. “I have known them for a long time, and they have meant a lot to our city.”

Council Member Jamie Heard said that he appreciated what the mayor had said and that he also appreciated a local church honoring Jennifer Boyd on having been named the city’s first African-American superintendent.