City of Valley honors Milford, Williams for years of work in community 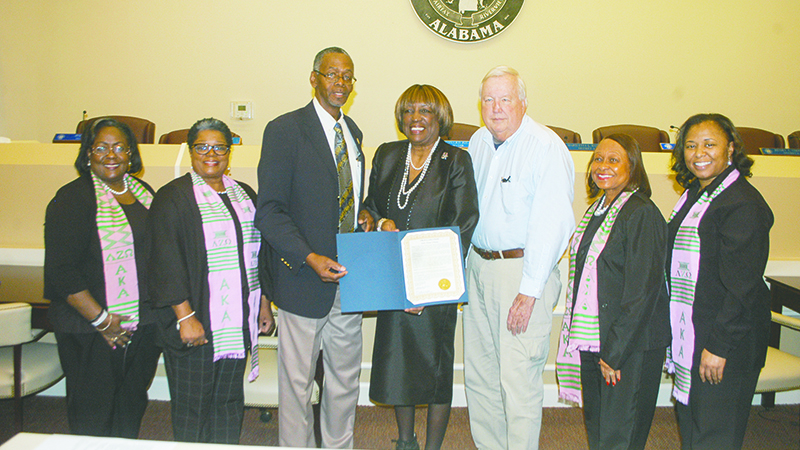 VALLEY — In recognition of Black History Month, the Valley City Council on Monday unanimously approved proclamations recognizing Emily Thomas Williams and Arthur Milford Sr. as valued members of the community and commending them for their long-time commitment to service to the citizens of Valley and the Greater Valley Area.

A retired educator, Williams earned a B.S. from Alabama State University and M.Ed. and A.A. degrees from Auburn. She taught school for 44 years including stints at Rehobeth High, LaFayette Lanier Elementary and W.F. Burns Middle School in Chambers County and Long Cane Middle School in Troup County. She was named a Teacher of the Year on several occasions and served as president of the Chambers County Education Association. She’s been a member of Alpha Kappa Alpha for 51 years and is a charter member of the Lambda Zeta Omega chapter.

The proclamation hails her efforts to collect food for local food closets and her work for Adopt-A-Family.

“She has visited nursing homes,” the proclamation reads, “made dresses for girls in Africa, collected shoes, eyeglasses, seasonal wraps and backpacks for those in need and has been instrumental in helping raise thousands of dollars for scholarships for high school seniors who have enrolled in college.”

“Through her work ethic, her family life and church life she has set an exemplary example of service to and of giving back to the community,” the proclamation reads.

Emily and her husband, Lee Williams, live in Valley.

Arthur Milford Sr. is known to many as “Pee Wee.” He’s a native of Valley and was married to the late Martha Tyner Milford for 61 years. He has three children, Shirley, Jacqueline and Arthur Jr.; four grandchildren, 11 great-grandchildren and three great-great grandchildren. Milford was a trailblazer in the field of civil rights. He participated in the historic Selma-to-Montgomery march some 55 years ago now, was one of the first African-American truck drivers for West Point Pepperell, the first African-American electrical for the company’s Service Division. He is a long-time member of the NAACP and has served as chairman of the Alabama Democratic Conference.

Milford retired from WestPoint Pepperell after 47 years of service and then worked as a courier for CharterBank.

Milford is a member of Fairfax Masonic Lodge No. 876 and is a 32nd Degree Shriner. He has been a member of Bethlehem Baptist Church for 69 years and served as chairman of the board of deacons for 25 years and Sunday School superintendent for 30 years.

“Arthur Milford Sr. is one of the oldest African-American residents of Valley,” the proclamation reads. “(He) was involved in and has firsthand knowledge of its history and is willing to share his wealth of wisdom and knowledge whenever necessary.”