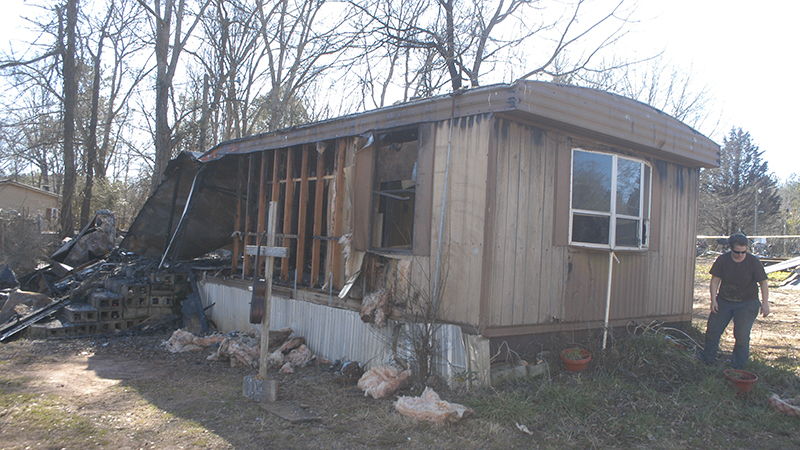 An early morning fire on Saturday on County Road 190 claimed the life of a 75-year-old Valley man. -- Wayne Clark

VALLEY — An early Saturday morning mobile home fire that claimed the life of a 75-year-old Valley man is currently under investigation, though foul play is not suspected at the time.

Herman Charles Brown was declared dead at EAMC-Lanier Hospital after being taken there by East Alabama EMS.

Brown lived alone in a single-wide trailer off County Road 190 several miles south of Valley. He’d moved to the area from Randolph County after his wife died in 2007. Neighbors described him as the kind of man who didn’t make enemies. He loved to play the guitar and sing.

He’d played with gospel bands in the past, and the kids loved to call him mountain man. He loved raising chickens and had plenty of them in his yard.

Brown lived next door to his brother, retired Lanett Police Chief Ben Brown, and niece, Amanda Brown. Last November, Ben Brown lost his home to fire and has since brought in a doublewide mobile home to take its place.

Amanda Brown told The Valley Times-News that she had been awakened by the smell of fire around 2 a.m. Saturday morning.

She looked for its source and spotted dense black smoke billowing from her uncle’s trailer.

“I grabbed two fire extinguishers and ran over there,” she said, explaining that she had to break a window to the bedroom in order to fight the spreading fire. The East Alabama Fire Department was contacted, and EAFD units were on the scene in minutes to put out the blaze. The Huguley Fire Department also assisted.  Firefighters were able to remove Brown from the trailer and made gallant efforts to revive him.

“For a brief moment it looked like they were going to bring him back,” said Amanda Brown, “but by then he was too far gone. I just wish he’d left his bedroom door closed. That would have kept the smoke from getting in there.”

Two structure fires happening next door to each other in a short period of time have the Browns concerned that they may not be accidental, that foul play might be involved.