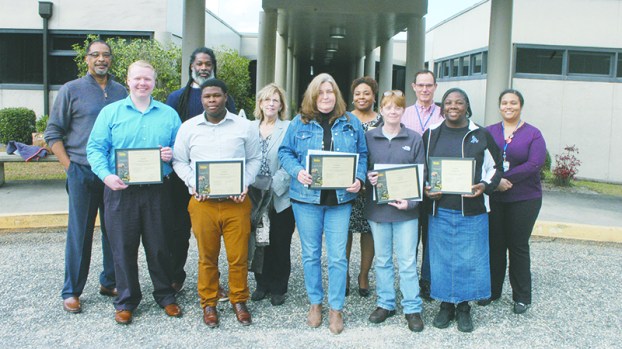 VALLEY — Back in mid-January, five local people were in need of better credentials in order to find better-paying employment. They enrolled in a short-term certification program at the Valley campus of Southern Union State Community College. In the span of four short weeks, each of them earned certification in such work skill areas as driving a forklift, basic computer skills, internet use, e-mail use, work keys, OSHA literacy and CPR.

“The class started on Jan. 21,” said June Abercrombie, SUSCC’s interim adult education director. “It was scheduled to last for five weeks, but our students finished all their requirements early. This was the first time we offered this on our Valley campus, and we are having our first certificate ceremony today.”

The ceremony took place Wednesday afternoon in the library inside the John Carmichael Building. Receiving certificates were Jonathan Lawrence, Jatonio Carlisle, Kristi Pruitt and LaWanda Watts, all of Lanett, and Angela Nelson of Beulah.

Abercrombie commended each person for getting a lot done in a short time and in doing so earning the kind of certification that can help them in their careers. She thanked Carlton Jones Sr., an instructor on Southern Union’s Opelika campus, on having done a great job of working with the students.

“This will give you a leg up on the hiring process,” Jones told them. “This was a really good class, and I enjoyed working with you. We had some fun, but when it was time to get serious we did. Each of you getting eight certificates in four weeks is really good. Congratulations.”

Jones said that OSHA certification is a requirement for safety directors.

“They were really good to work with.”

“We have a waiting list for our second class,” she said. “We can do it when Mr. Jones can schedule it. The classes takes place in the computer lab next to the library. Right now, we are trying to get the word out about this.”

LANETT — One of the City of Lanett’s major investments for fiscal year 2020 arrived in town late Wednesday night.... read more