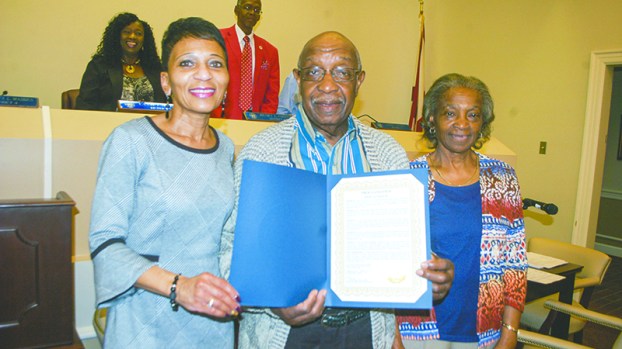 David Lee Floyd Sr., at center with wife, Lottie, was honored by the Valley City Council on Monday on having been a good role model for his church, community and its citizens. --Wayne Clark

VALLEY — As special presentations during Black History Month, two Valley men received proclamations as valued members of the community at the Monday meeting of the Valley City Council. David Lee Floyd Sr. and John Gibson were hailed as role models for the community for their commitment to public service and setting good examples for their fellow man.

A native of Lee County, Floyd graduated from Wacoochee High School and worked at the L.C. Sands Store on Columbus Road, just across the Lee County line in the Lower River View community in Chambers County. He dreamed of one day owning that store and that dream came true in 1974 when he became the first African-American to own and operate a full-service, one-stop grocery store in the area. He and wife Lottie ran Floyd’s Grocery Store until 2003. At the same time, Mr. Floyd worked for Uniroyal in Opelika for 37 years and seven months.

While running the store, Floyd gave back to the community by sponsoring men’s and women’s softball teams that won many championships over the years. They sponsored annual Easter egg hunts for children and prepared Christmas baskets to be given out over the holidays. Floyd has been active with the St. Stephens CME Church since he was six years old, served as the church treasurer for 16 years, sung in the male chorus and was in the men’s ministry for an extended period. He worked on a community project to have a local street named Chambers Drive.

Mr. Floyd was accompanied by his wife and lots of friends and family members for the presentation.

Mr. and Mrs. Floyd received a standing ovation when presented a copy of the proclamation. Council Member Marquetta Madden made the presentation. She said it gave her great pleasure to do so because she could remember stopping by Floyd’s Grocery many times over the years and knew from personal experience that the Floyds were first-rate people.

“I’m so pleased to see so many family members and friends of yours here this evening,” said Council Member Cassie Carlisle.

A Valley native, John Gibson attended the Rehobeth School in the Fairfax community and graduated from Lanier High in Lanett. He moved to New York City in 1954 and served in the military for a couple of years before attending New York University, where he earned a bachelor’s degree. He worked as a security manager for Avis Rent-a-Car for 17 years. He did the job so well he was promoted from agent to station manager to city manager and eventually was assigned to the company’s world headquarters in Garden City, New York. He was the first African-American to have responsibility over three states — New York, New Jersey and Connecticut — for the company and was also the first African-American to serve as a Union manager.

After 17 years, Gibson retired and returned home to Chambers County, where he joined the sheriff’s office. He was with the CCSO for 23 years and retired as a captain. He then joined the Civil Air Patrol in Auburn, where he reached the rank of major. He became quite skilled in flight systems and still flies helicopters in search and rescue operations today. Dressed in is Civil Air Patrol uniform, Gibson received a standing ovation from the big crowd in attendance at the council meeting.

“Through his work ethic and willingness to serve,” the mayor’s proclamation reads, “Mr. Gibson is an exemplary example of supporting and giving back to his community.”

“I want to congratulate both Mr. Floyd and Mr. Gibson,” said Mayor Leonard Riley. “This recognition is well deserved.”

When the LaFayette boys’ basketball team picked up its first loss of the season on Monday, it was an end... read more